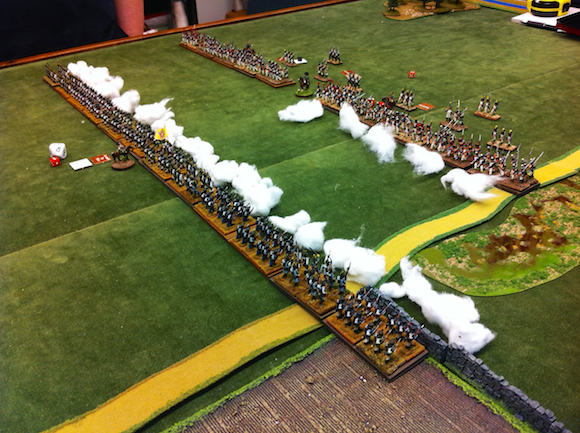 We had a blast from the past in our latest game night. Petri demonstrated the semi-skirmish Napolenic ruleset Chef de Bataillon, published in 1995. We pitted one Austrian battalion (144 figures) against two French battalions (72 figs each).

The rules are trying to simulate the role of the battalion commander. Which they do fairly well in my personal opinion. Unfortunately this means that the player has very little to do, apart from trying to roll the dice well enough to get his unit to do what he wants. Even shooting is not automatic, you have to get your unit to follow the order to “fire”. Very strange.

Personally I think the rules are an interesting anomaly as I prefer grand tactical games, where troops actually set up far from each other, the player can decide where and how to attack and defend, and actually feel that he is fighting the opponent, not the game system.

Anyway, in our tense three hour game the Austrian battalion was happily decimating the French troops until a stray bullet killed the Austrian officer. The Austrians then routed from the field. As the Austrian commander the decisions I made during the game were: 1) “Hmm.. I want to shoot the enemy into pieces, that shall be our plan.” 2) “The way to do that is to form in line and advance.” 3) “I will see if skirmishers are useful: Deploy, (not really, therefore) recall skirmishers.” 4) “Advance into close range and keep on shooting until someone breaks.”

Not that exciting, but interesting as an exercise.