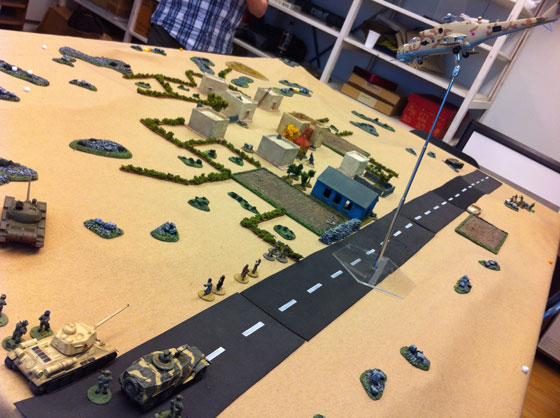 We started a new Force of Force campaign yesterday: “Enduring Oppression” The Soviet experience in Afghanistan. We will be fast-forwarding through the long years of the occupation. In the beginning the Afghans will be poorly armed and disorganised, but as the game progresses they will gain experience and equipment. The Soviets will also evolve during the campaign from a strong but inflexible mechanised army to an army that is more suitable to operations in a mountainous country.

We have three players in the campaign playing against the umpire (me). Janne has a platoon of VDV, Petri has Soviet motor rifle troops, and Eero plays a hard-line Khalqi platoon leader with a mixture of raw conscripts and revolutionary Sarandoy gendarmes. Each player had starting pool of points to buy their troops, and victory points gained during the game can be used to buy and upgrade troops. They also have access to scenario-specific assets (tanks, artillery, airlifts).

The Soviets have to determine before each mission which of their men are sick (1-2 on d6) and the poorly motivated Afghans are prone to desertion (1-2 on d6). Most of the losses will be non-combat ones, and the Soviets will be realistically struggling to get their squads to anything resembling full strength. 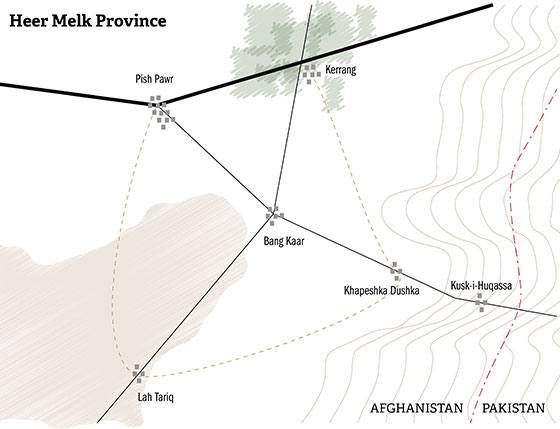 The campaign is set in a fictional province of six locations controlled by two dushman factions, religiously motivated tribes operating from Lah Tariq, and secular guerrillas based mostly around Bang Kaar. The six locations on the map can be pacified by winning missions there. This will lower the insurrection level in that location. Losing a mission will raise the insurrection level in that location.

The first scenario was dictated by me to be the pacification of Pish Pawr, and building a fortified base there. This went well for the players, as they had access to incredible amounts of firepower. The village was pacified, unfortunately practically every house in the village was flattened by Soviet 122 mm artillery or Hind strafing runs. 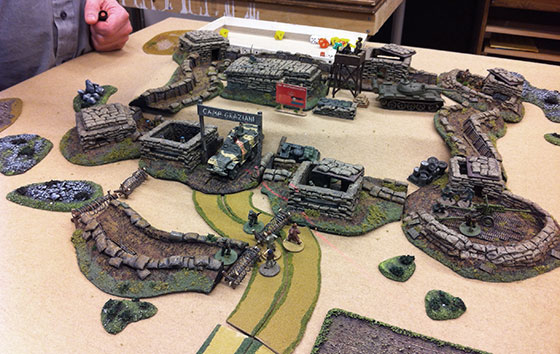 The camp is practically unassailable by the lightly armed dushman troops, so the second scenario was an ambush of some supply trucks, which was intended to lure a reaction force from the camp into a killing zone. Unfortunately this did not work for the dushman fighters, who lost most of their men before retreating back towards Lah Tariq. 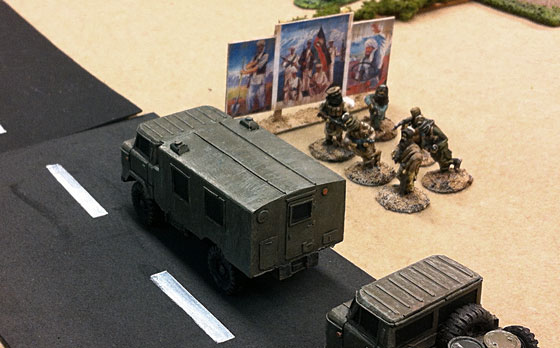 The players will now have pretty much free hand in deciding what operations to attempt next. They can move into any of the locations, even through enemy controlled territories. The operations they plan might become the next scenario, or maybe something will happen that stops them from launching the mission as planned. One thing is certain though, the dushman fighters will not be the push overs they were in the first two scenarios.