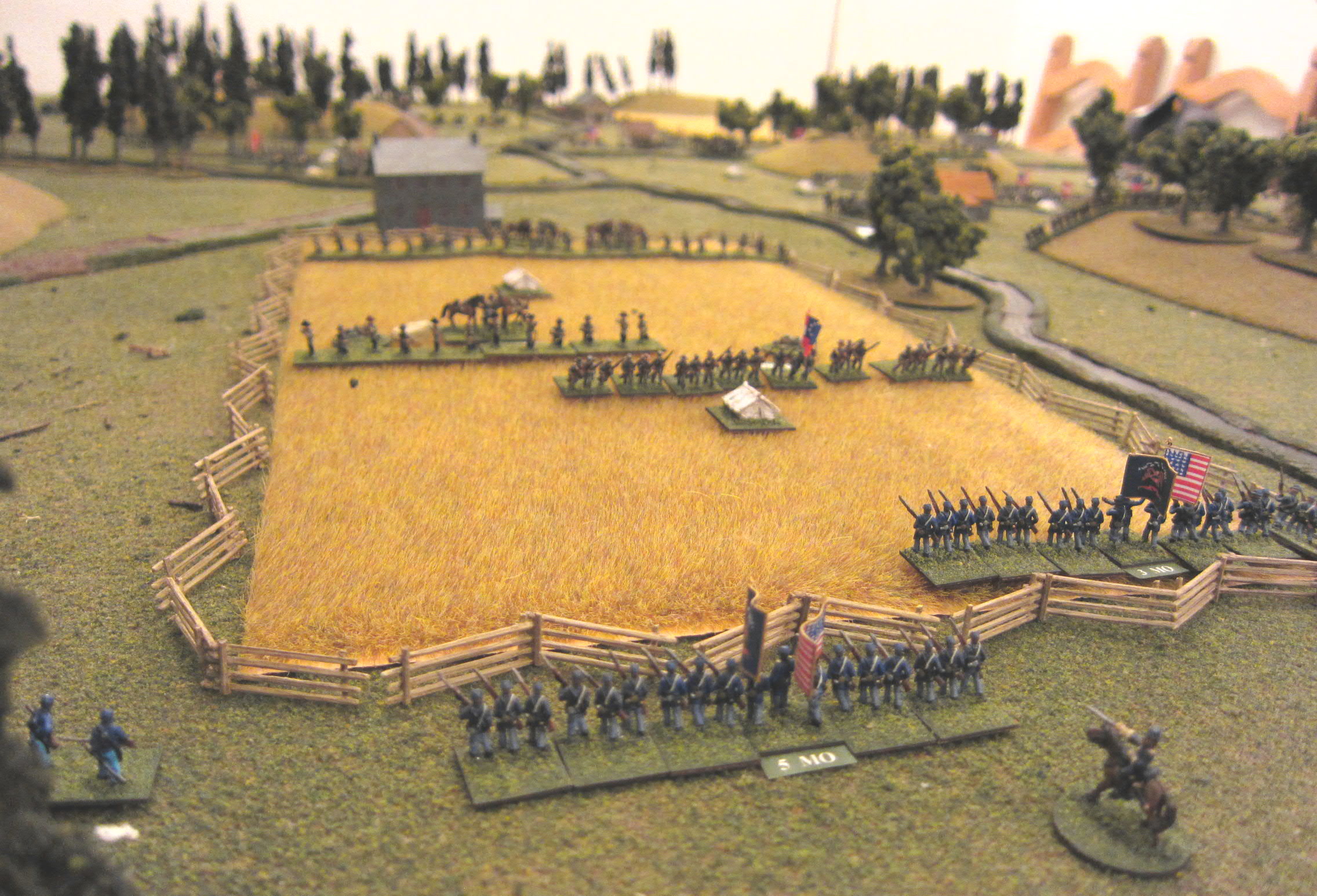 This is the first game where we tried the modified nappy ruleset March Attack since for larger ACW battles we needed a ruleset that would be quicker than Regimental fire & Fury. Some rough ends were present here and there but considering it was the first trial run it worked just marvelously!

The History
In August of 1861, the firebrand Union general Nathaniel Lyon decided to check the growing strength of the Confederate forces in Missouri. He had bested the Missouri State Guard in smaller engagements prior to this, and was confident that his well-equipped (if smaller) force could beat the poorly equipped Confederates, many of whom lacked modern firearms or bayonets. Lyon also knew that the Missouri State Guard was being reinforced by the Confederate Western Army, and wanted to seize the initiative before his more numerous foes could advance on his supply lines.

Lyon succeeded in taking the Confederates by surprise, and on the morning of 10th August he routed the Confederate cavalry guarding the approaches to their camp and quickly stormed up the hill overlooking their main force and the strategic Telegraph Road bridges over Wilson’s Creek. Lyon had split off two flanking detachments from his small force, and as his main body advanced from the north, one detachment moved to protect his eastern flank across Wilson’s Creek while another launched an attack from the south. At first all went well, as the Confederates scrambled to muster and form coherent lines. Soon, however, Confederate numbers began to tell, and after the small flanking detachments were overwhelmed Lyon found himself hard pressed. He held off several assaults on what came to be known as Bloody Hill, but was eventually shot from his horse as the Confederate attacks grew in strength. Seeing the the day could not be won, the Union troops withdrew from the field.
Short Introduction to the Rules
Units are rated by Combat Value (CV), a single number derived from strength and quality, usually ranging from 3-10. Experience and different weapon types are also still present and important. For instance, a small unit of 300 US regular army troops would be Trained CV5, Rifled Muskets. A large unit of 600 volunteers would be Green CV8, Smoothbore Muskets. The Green troops have more mass and staying power (CV), but that CV is halved in fire combat, making the smaller unit of Trained regulars more deadly, if they can keep their distance.

Essentially,  the turn goes as follows:
1. Both sides attach/detach leaders.
2. Roll 2d6 + CiC’s command rating to see who has Initiative. That player chooses who goes first this turn.
3. If any formation has been beaten up (usually 1/3 losses), roll a quick morale test to see if it retires or breaks.
4. If a formation has withdrawn and wants to rally CV’s back (and possibly get routed units back), roll it up – this is a once per game event, and probably fairly rare.
5. Roll for arrivals (usually built in to the scenario).
6. Issue orders (written orders, simple guidelines).
7. The first side moves, making any charges first. Movement rates are generous, and doubled outside of engagement range (9″).
8. Both side fire. To fire, you simply roll d6 versus the firing unit’s CV, with a few adjustments for range and cover etc. Green troops are half CV …
9. Charge combat. Both sides roll d6+CV+mod’s. (chargers that took CV loss during fire have to test to continue, so can be stopped)
10. Recover from Disorder. You start with D2, go down to D1, then recovered. D2 and D1 have the same effect, it’s just a time balancing mechanic.
(Repeat 7-10 for the second side)

The actual mechanics are simpler than RF&F (CV used as the basis for everything), and everyone on a side moves at the same time without testing for anything, so hopefully the speed will be fairly quick, despite having larger commands.
The Game
The game followed the course of history fairly closely … much to the surprise of all involved! At first, the Union attacks in the center and south seemed unstoppable, but eventually the southern attack ran out of momentum, Confederate reinforcements arrived, and it was thrown back and routed. At the same time, the small eastern detachment was overwhelmed by a flood of Confederates. This left the main Union force, which had crushed a Confederate counter-attack and was marching on the Telegraph Road bridges, isolated and nervous. With his nerve failing at last (i.e. “Aksu rolled snake-eyes”), the Union commander ordered his force to break off and retire.

Here are the pics in chronological order. We take pic of the overall situation at the end of every side’s turn occasionally followed by some closeups. 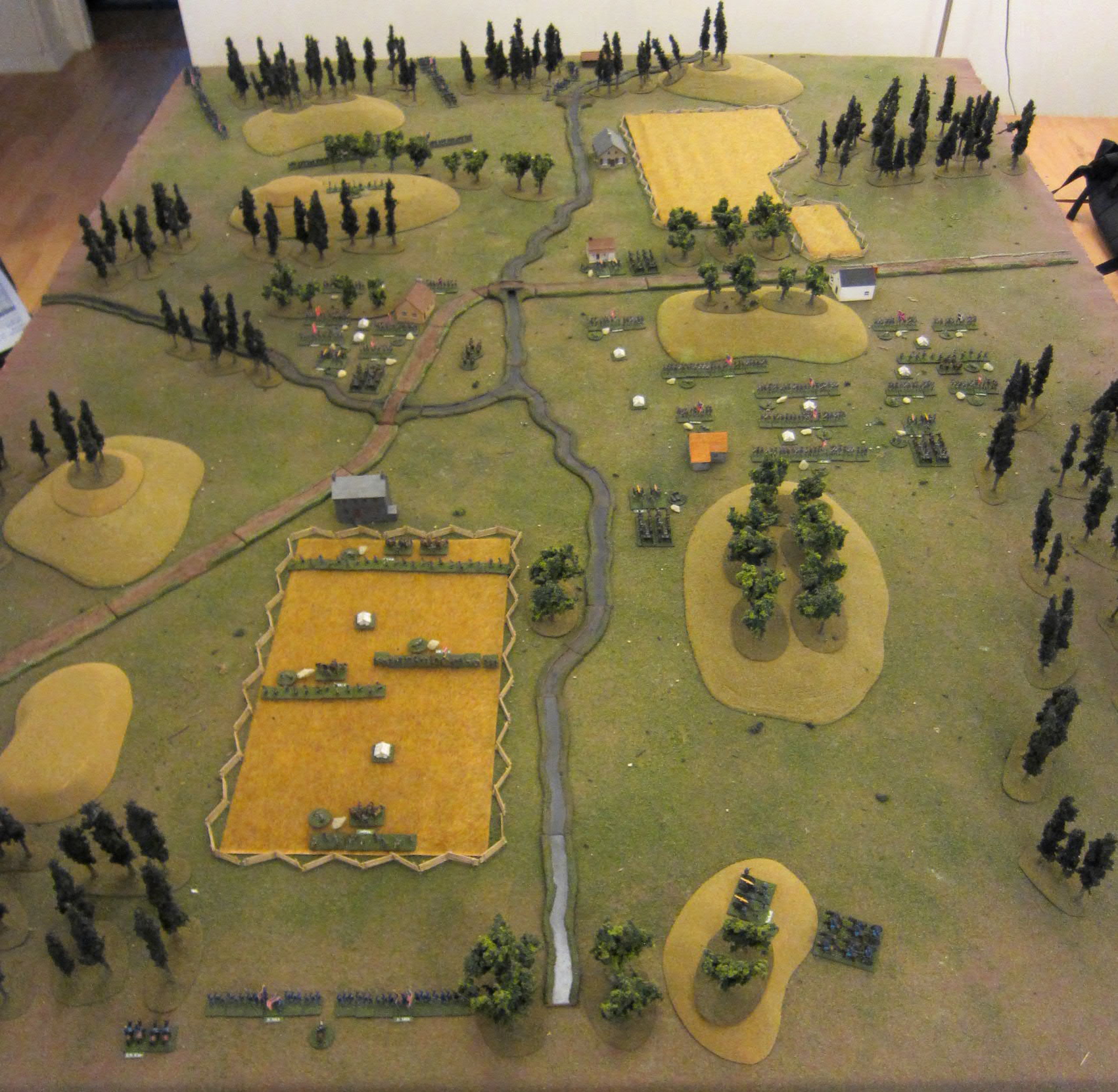 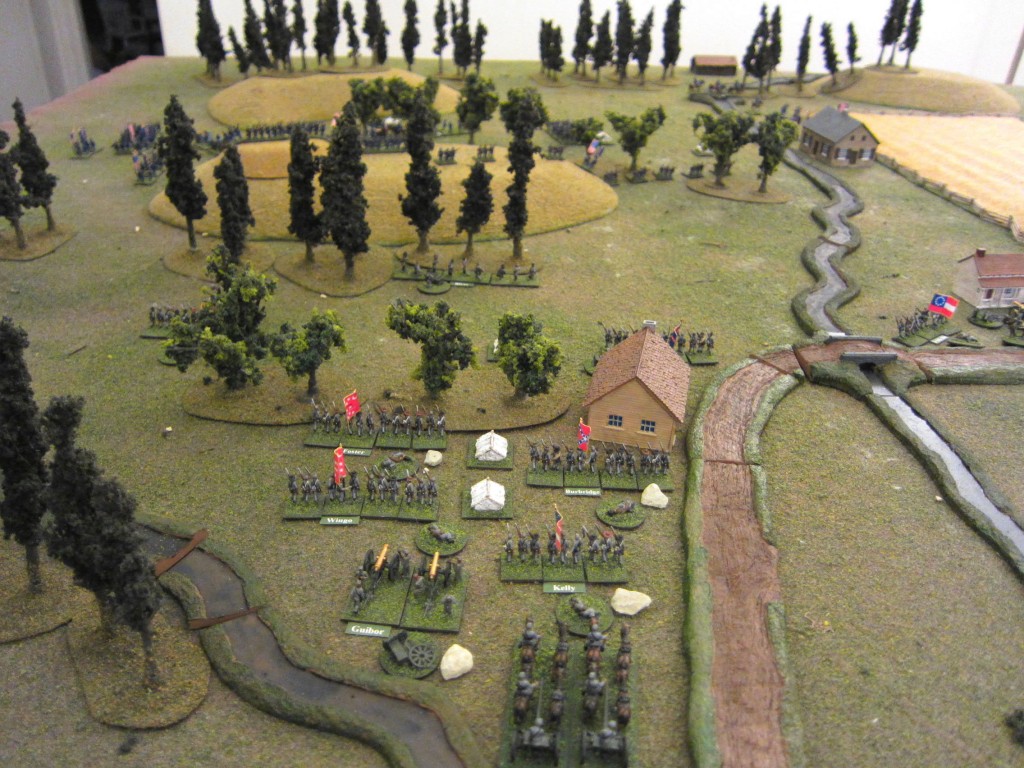 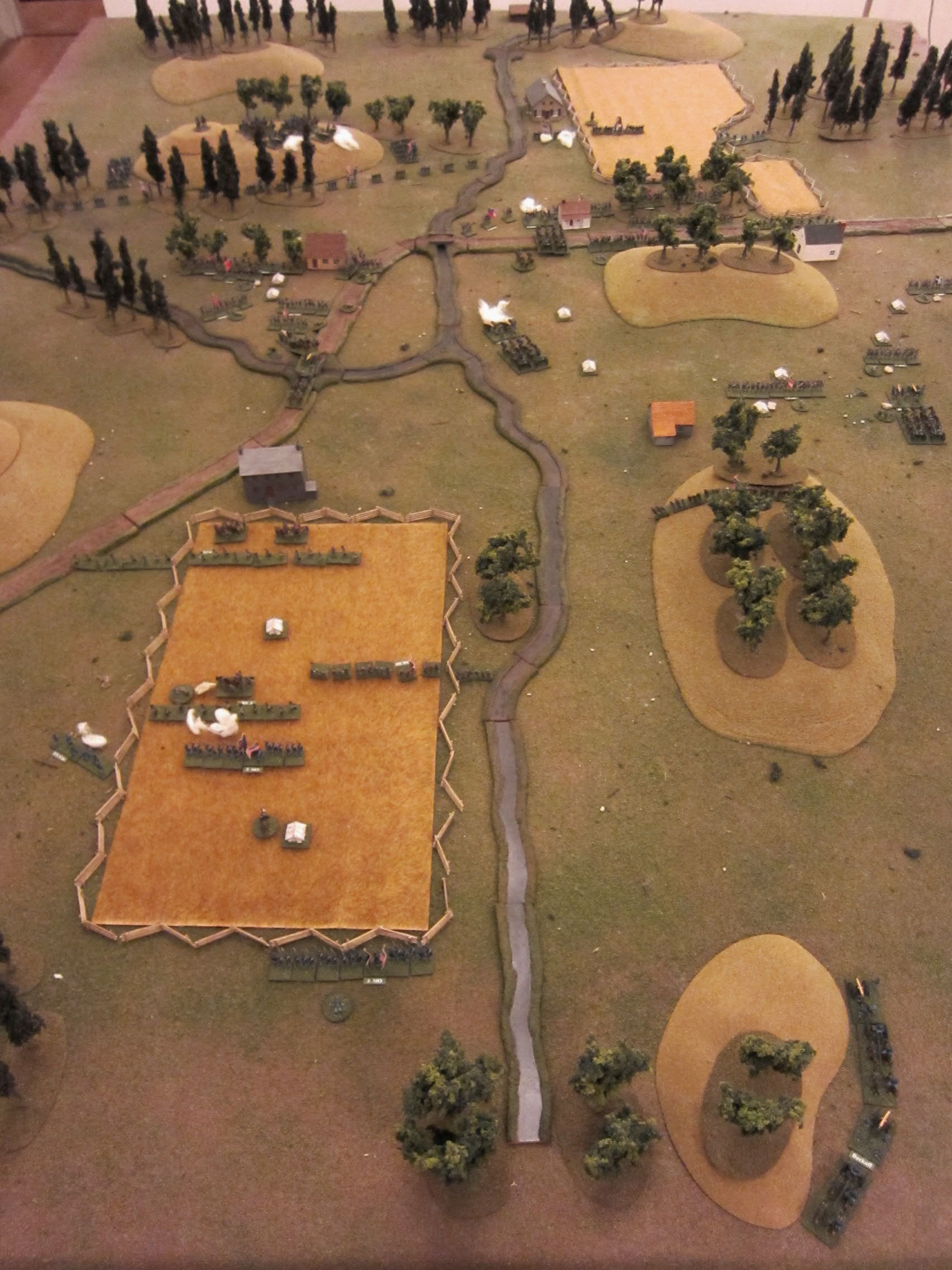 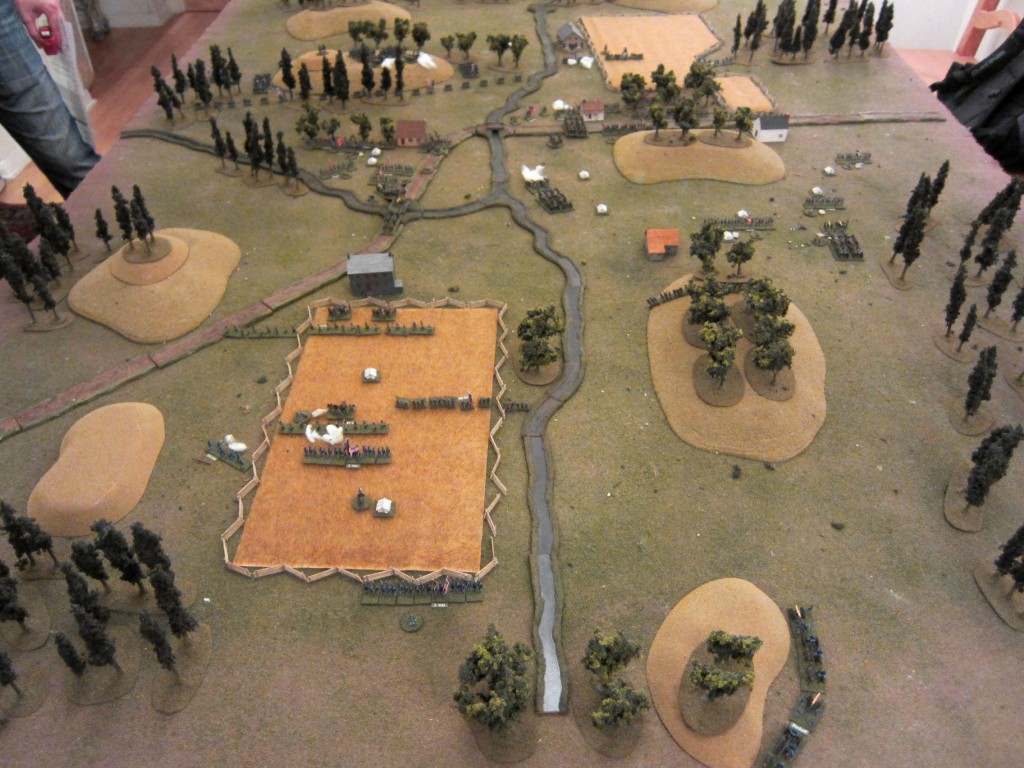 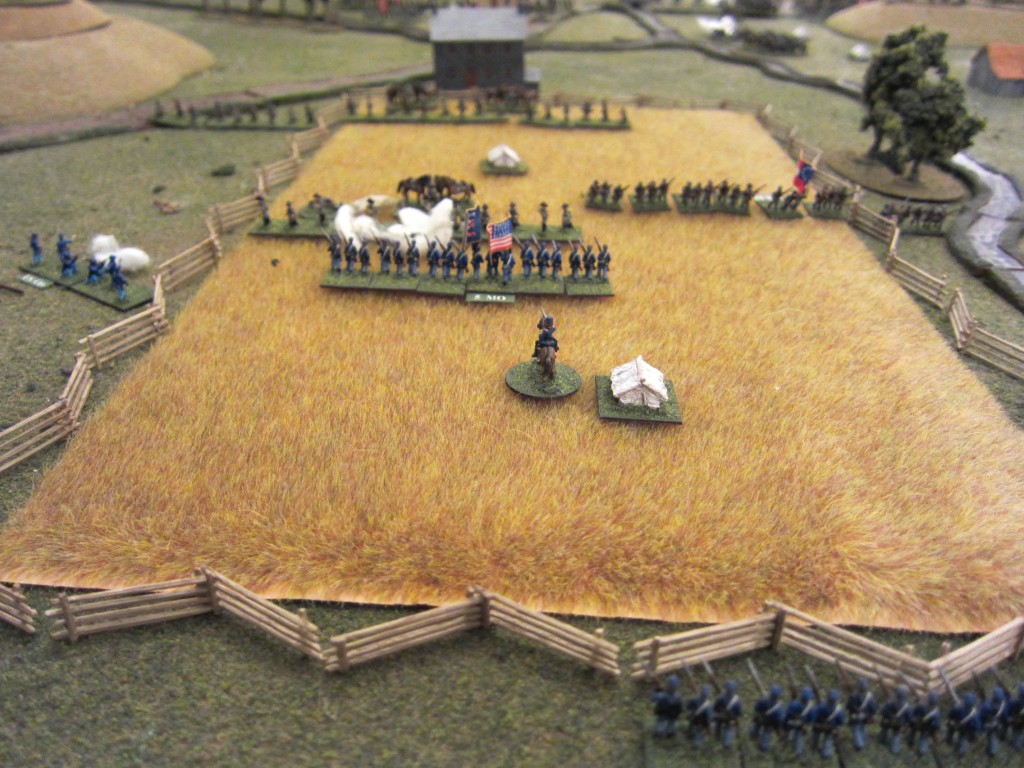 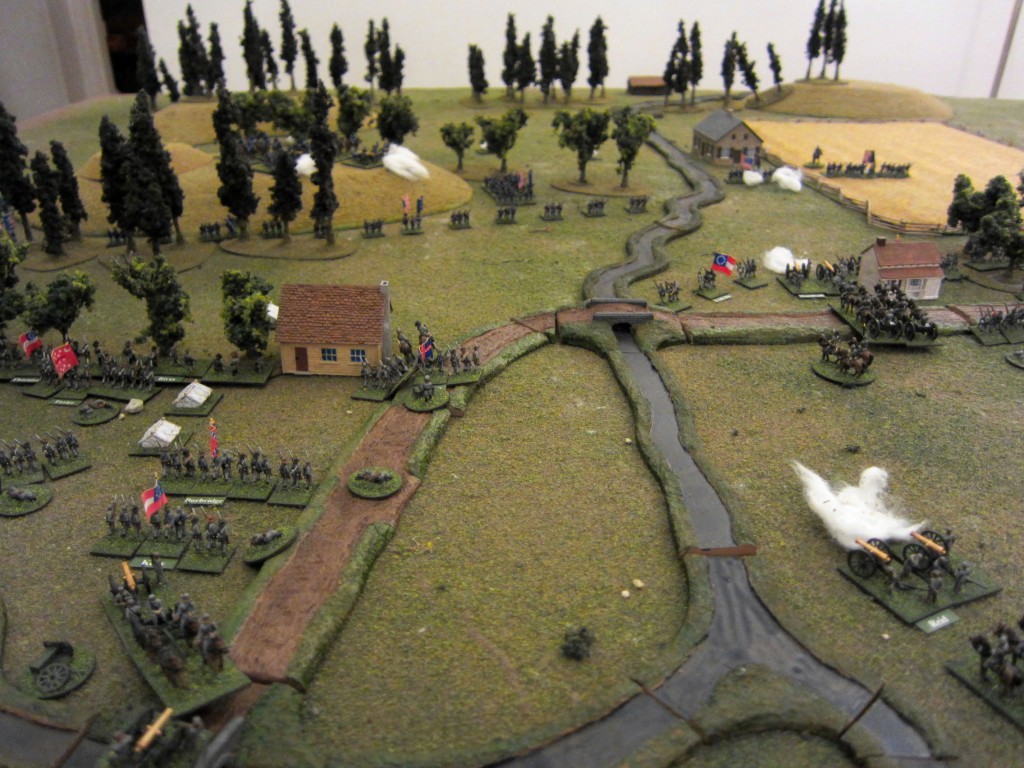 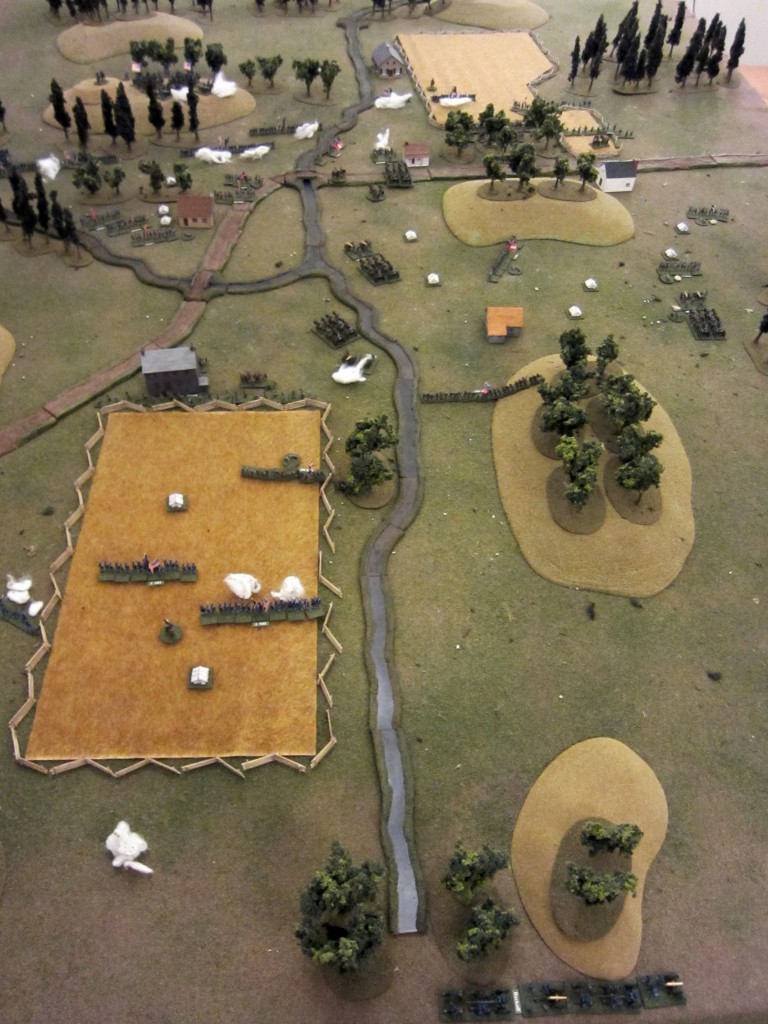 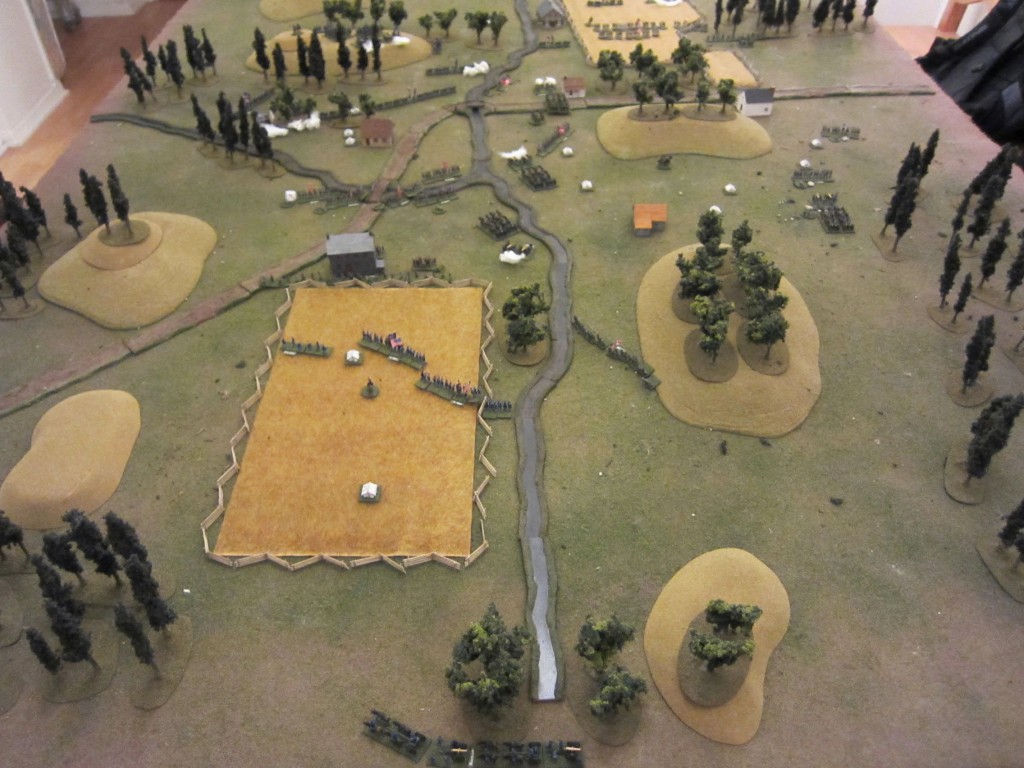 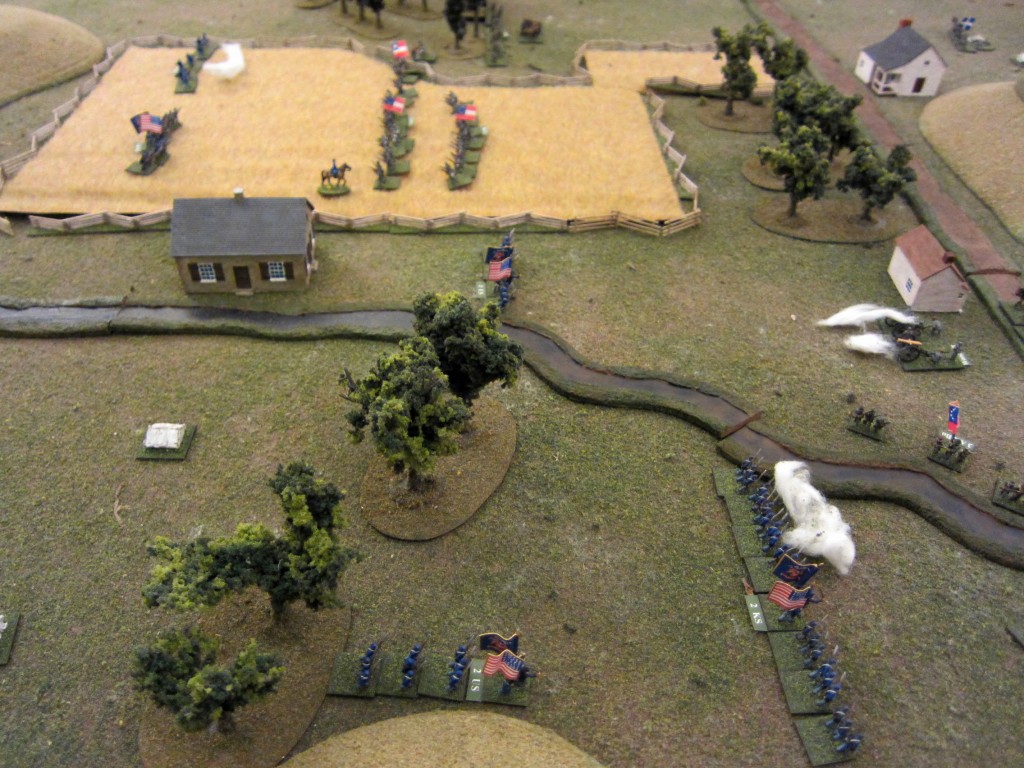 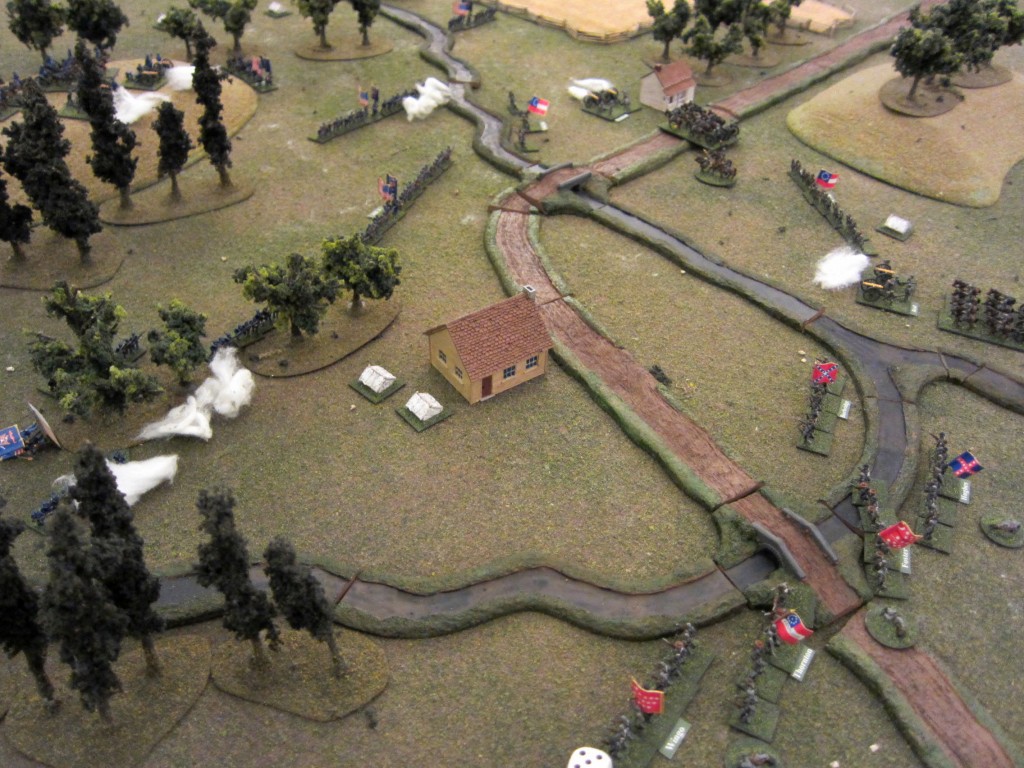 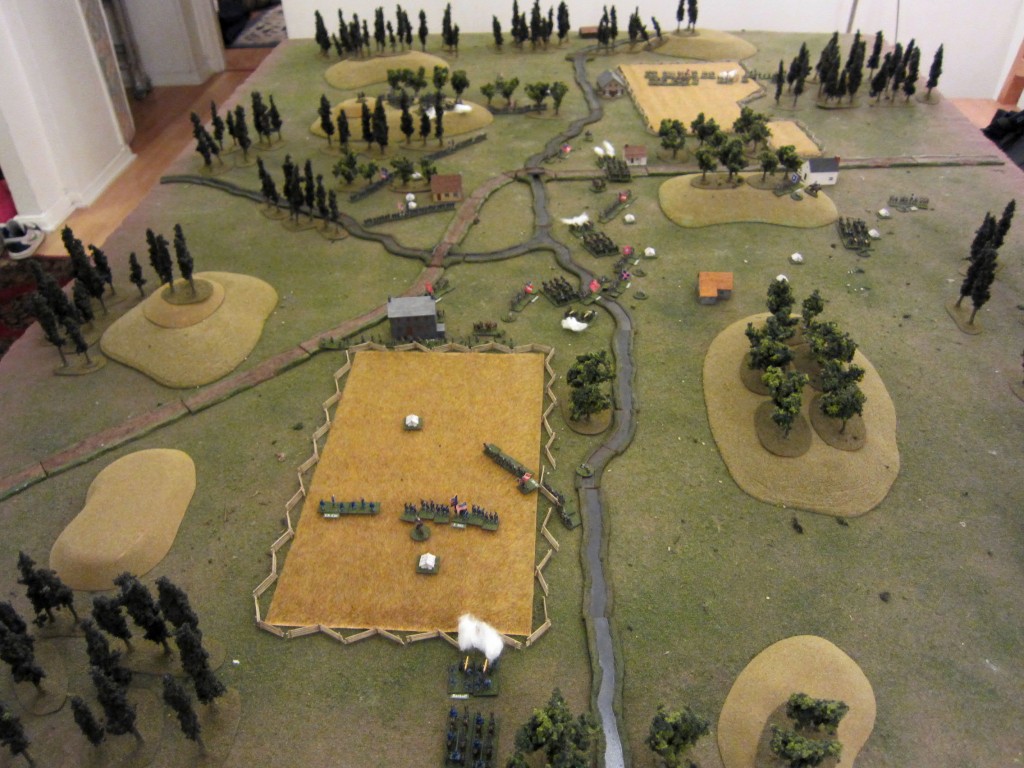 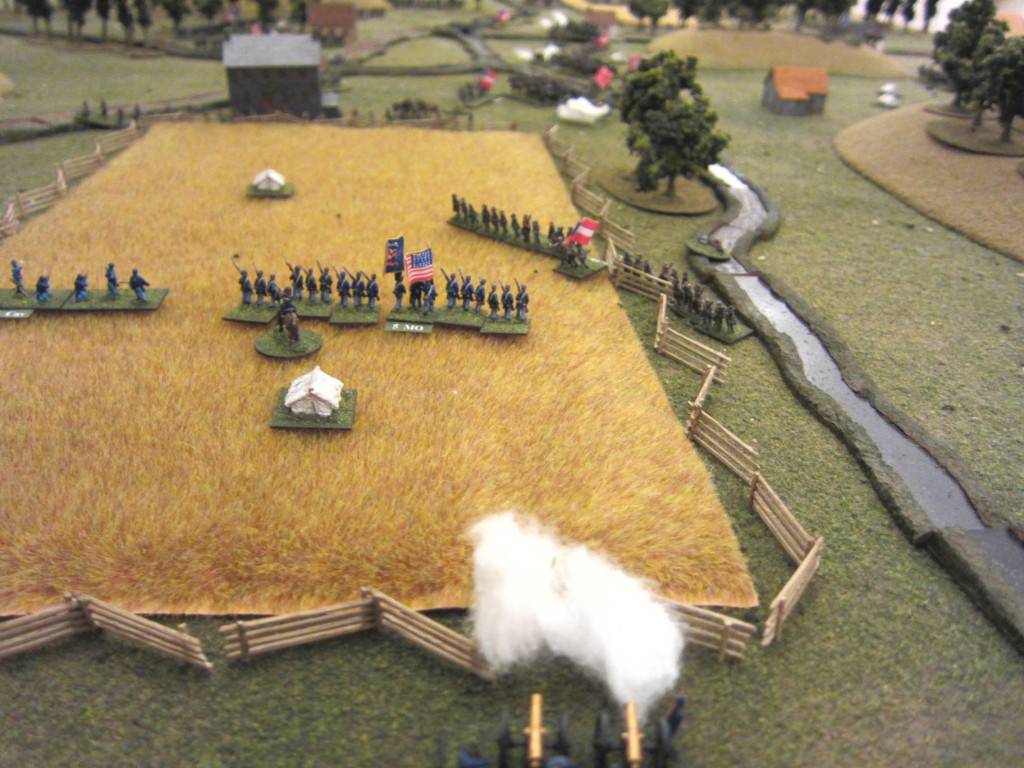 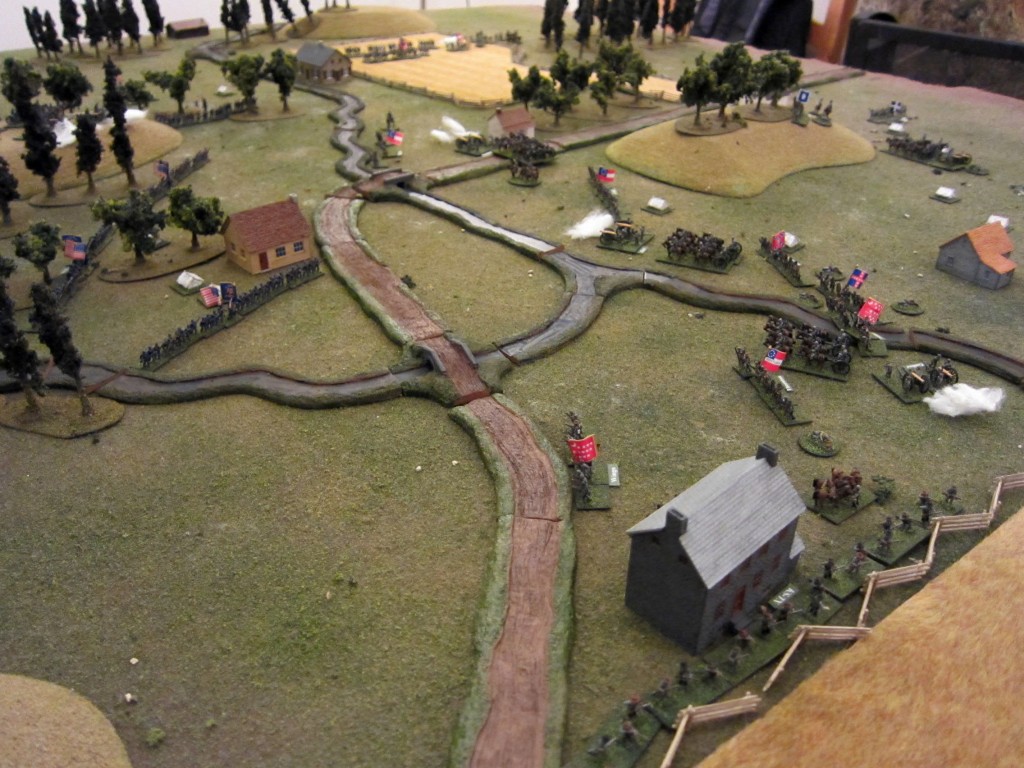 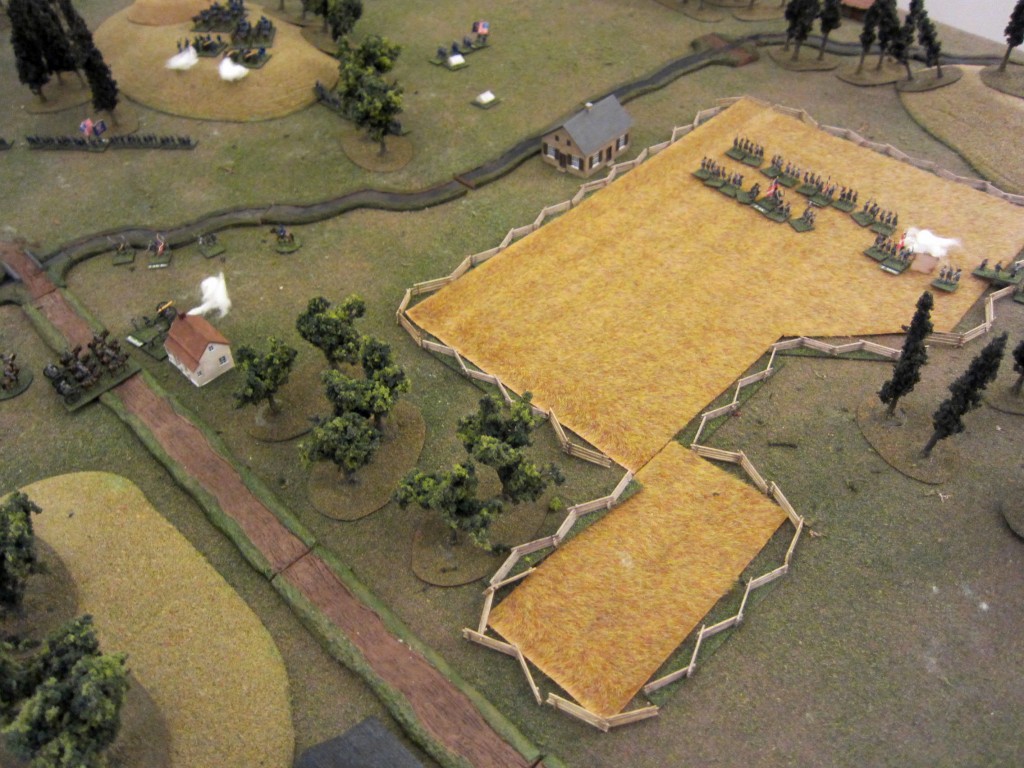 The Commentary
First, many thanks to Aksu (Union commander Lyon), Janne L (the ill-fated Missouri State Guard), and Mr V (the stalwart CSA Western Army) for helping to get the ACW gaming going again. This was the first time I had not just one, but two forces under my command totally crushed …

However, despite some playtesting bumps, we shouldn’t lose sight of the main fact that we played one the most confusing and sprawling ACW battles, involving 15 Union units and 26 Confederate units in 5 separate commands, to a “definitive end” in four hours. I don’t think this would have been possible with RF&F, so the rules seems well worth tweaking a bit and having another go.

CV Ratings.
I’m reconsidering how these are structured. Right now it is based on the 1:80 stand count being the base for Green, with +1 added to Trained, +2 for Veteran, etc. This seems simple, but I think it might make the Big/Green units too powerful. If I (for example) compressed the table so that the biggest Green unit (800 men, 10 stands) was CV 8 instead of 10, that by itself might go a long ways to balancing things like close combat between large versus small units.

Formation Morale Tests.
These are supposed to be big events, and they were! We probably need to get used to thinking about when to withdraw units and formations (if possible). I think the compromise of counting CV loss to get to the Shaken/Spent levels, and then actually testing morale when whole units were lost, was a good one. In the original rules, you only count units lost, regardless of quality, but in the ACW you have to deal with the much different unit sizes. In the original rules there was only one “rating” – Shaken at 1/3 and Spent at 2/3 – but I used variable levels to allow for different levels of confidence and so on.

Movement.
I was happy with the speed, and going back to using movement trays should make it even faster. I need to clarify terrain effects on speed and disorder. One thing that would simplify things a bit would be to simply halve or quarter movement in Broken or Rough, as opposed to the slightly different rates in the current (RF&F based) chart.

Fire Combat.
Okay … so I overdid things with Green Musketry and Shotguns.  😉  It will be easy to 1) remove those effects, and 2) translate the “halved’ modifiers to -1 and -2 and such, so that all effects work the same way. In the original rules, musketry (average battalion CV 6) is *double* CV, but only has a range of 3”, and uses the “halved” type modifiers. Artillery on the other hand only uses base CV (average battery CV 4), and uses the “plus/minus” type modifiers. The overall effect is that artillery produces single kills at range, and both infantry and artillery can produce double kills at closest range. I wanted to use the same system for both infantry and artillery, and we also have to deal with longer ranges, different weapon types, and different ammunition types.  I think I have a better system worked out. However, the base assumption is that “double kills” should be rare, rather than the common rule. Thoughts? How about keeping the double CV only for defense versus charges?

Charge Combat.
I didn’t think through how the different unit sizes would effect charges, but the easy fix is simply to combine the CV’s (and mass) of all attacking units, rather than fighting individual combats. On the other hand, this might make Wave Attacks too powerful, as it would be easy to stack up almost double CV’s versus the defender (assuming all went in). Given the nature of ACW combat (no real attack columns), it’s more difficult to stack up multiple unit attacks. As Mr V suggested, one compromise is to combine CV’s for the individual “waves” (first line, second line), so that attacking one large unit with two smaller units side-by-side would combine, but using a double wave wouldn’t. This seems to make sense? One final note – I’ll remove the “Green +2 to complete charge” unless there are thoughts otherwise, but I’ll keep the Bold (perhaps reduce it to +1).

Disorder.
Yes, we do probably need to use D2 and D1. There were some odd effects from not using them. Agreed? I need to make some more markers …