The “Battle of Swift Run Bridge” was an engagement between two small army corps (11,00 men per side) in 1862 … that never was. Although this is a hypothetical scenario, it can easily be imagined to have been an action on the flank of a larger army in the eastern theatre, or an engagement between two independent commands in the west. Both sides will deploy six full brigades on opposite sides of the Swift Run Creek (which is fordable). The primary goal of each force is the destruction of the enemy, of course! However, victory points are also awarded for holding The Bridge (A), The Hill (B), and The Farm (C).

In order to speed up play, I’ll ask the CiC from each side to send me a general deployment plan and orders for each division and brigade before the game (you’ll be able to make minor adjustments before the game starts). As you can see from the OB (and the map), the brigades are fairly balanced in strength, and each has an attached battery. The Confederates have a slight advantage in manpower, and the Union likewise in artillery – but the CV’s on each side are equal. Command ratings are fairly average, and are also balanced per side. The Swift Run Creek is a gentle stream and fordable as broken ground (but rough for artillery). The woods are light, and also treated as broken ground. The swamp is rough terrain (but impassable for artillery). The farmhouses are for show only, and the fences are the usual wooden variety.

In general, this will be a test to see how a big game plays with the new iteration of the rules. I think that each player will be able to easily handle a division, but we’ll see. The changes to the rules are mostly in the Firing phase, where I think I’ve worked out a system that keeps the original balance in the rules and allows for the variety of ACW weapon types. One change is that I’ve decided to go back to simply counting units lost (rather than CV’s) to determine when formations are Shaken and Spent, and we’ll test to see if this is workable using brigades as the basic formation. They are a little small (the original game uses divisions), but it would be great if it worked for the ACW. I’ve also included a terrain table this time.

On the figures front, I’ve added almost two hundred figures since the last game, mostly markers and command stands. So, we now have standing (fleeing, surrendering) figures to use for D2, and prone (casualty) figures to use for D1. I think that this will be all the markers I’ll need, and I also have all the figures done for this game and the next two games (the Pea Ridge battles). I’ll have to paint up a big batch of regular infantry for First Bull Run, but it should be manageable. In the meantime, I’ll spruce up my collection of hills and trees.

The Game
The Battle of Swift Run Bridge saw two corps of Union and Confederate troops facing off over the length of the Swift Run Creek. To the north lay a thick swathe of woods and the iconic bridge (which in point of fact saw very little fighting). In the center, a patch of swampy ground and woods bordered the stream. To the south, a small hill (destined to be known as “Cemetery Hill” by the troops who fought there) was nestled between two branches of the creek.

The Union artillery proved telling in the opening phases of the battle, as it massed along the eastern ridge and opened up in support of the advancing infantry. To the south, Stephens pulled his division back behind Cemetery Hill, leaving his guns along the ridge. In the center, Russel’s brigade stood firm before what was to prove a long and arduous bombardment by the guns of Wallace’s division, massed directly opposite his position.

Although the two sides settled down into static positions in the north, along a line from the swamp through the bridge and into the woods, the action in the south quickly grew heated. Hare’s and Marsh’s brigades stormed up Cemetery Hill in the face of galling artillery fire, only to reach the ridge and face the fire of the Confederate infantry lined up on the slope below them. Thrown back by a counterattack by Stephens’ defenders, they were reinforced by Raith’s veteran troops and again took the ridge. The fighting continued to see-saw across the ridge for several hours, with more bloody fighting just to the north in the patch of woods. As the Union troops faltered and pulled back from the patch of woods, the Confederates committed Johnson’s brigade, and then part of Cheatham’s brigade, to the fight over the hill. This proved the decisive factor, and McClernand’s troops were pushed back east of the stream.

However, although somewhat slow to react to the situation, Wallace’s division of fresh Union troops were now entering the fray. McArthur’s brigade was ordered forward from its position in the swamp, and Tuttle’s fresh brigade was ordered from reserve towards the fighting near Cemetery Hill. In the northern forest, the brigades deployed there continued to watch each other in relative peace. McArthur’s brigade foundered and recoiled as it tried to extricate itself from the swamp and cross the stream in the face of heavy enemy fire, however Russel’s brigade of Confederates likewise finally broke under the strain of continued bombardment by the Union gun line. As the fighting in the center calmed down, however, Tuttle’s brigade rolled forward and swept aside the Confederate defenders in the path of woods. With Tuttle’s brigade poised to cross the stream and break the fragile Confederate center, the two exhausted armies started to draw apart, leaving a bloody and doubtful advantage to the Union attackers.

Commentary:
The battle was a bloody, heads-on bash, with the initial fighting concentrated in the south and eventually drawing the bulk of the two armies’ forces towards that area. The importance of having a supporting second, third, fourth … and fifth … wave of fresh troops to either continue the momentum of an attack or launch counter-attacks was evident, as was the importance of well-situated artillery. We played 9 or 10 turns over about 5 hours, and fought the battle to a conclusion with each player commanding a large number of troops in a confusing situation, so overall things seem to have gone well. I’ll make some comments on the table (I need to make movement of units over hills and woods easier and less fiddly) and the rules (movement and firepower tweaks) in another post. 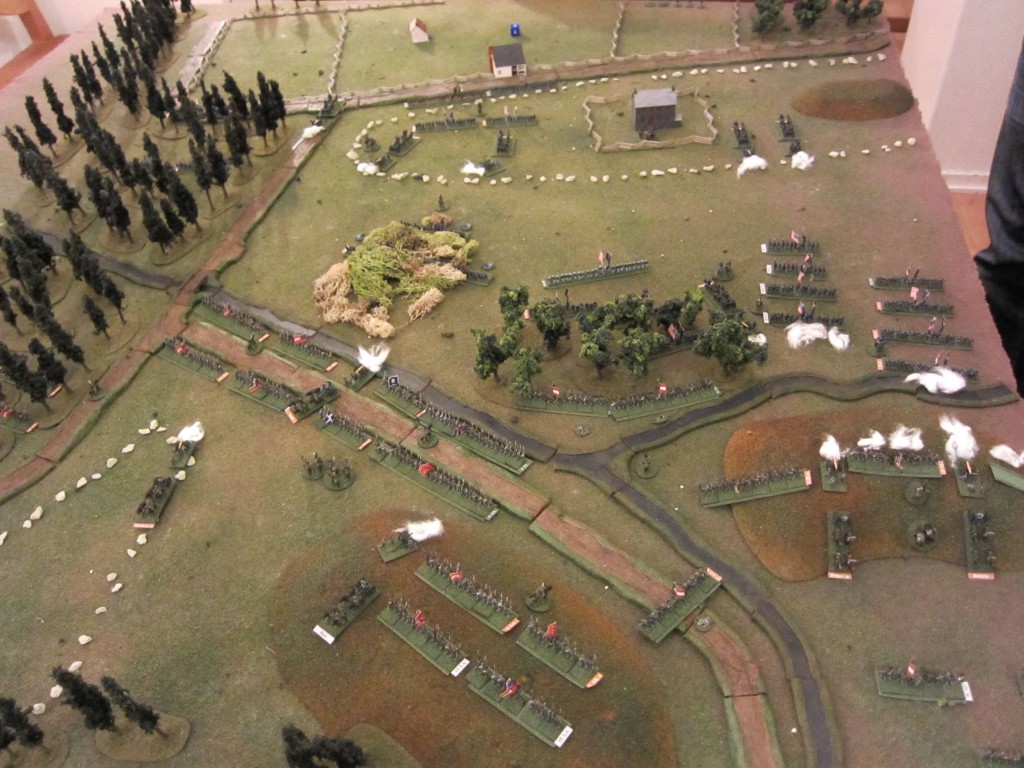 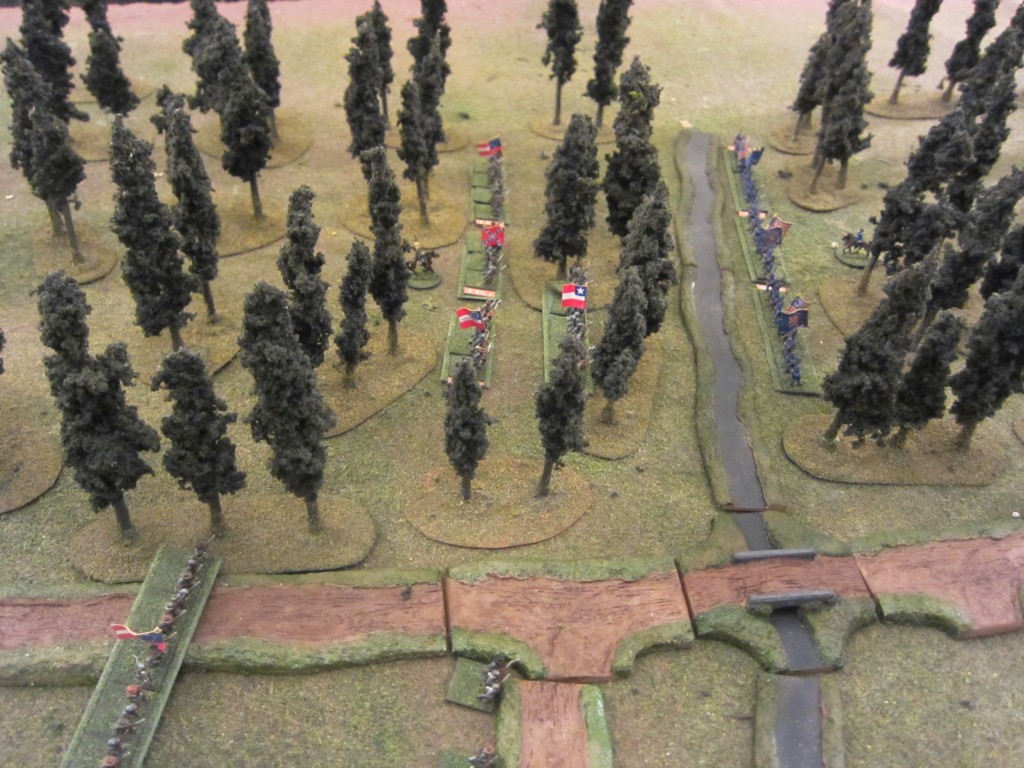 One thought on “The Battle of Swift Run Bridge”