Background
The Battle of Leetown was one of a pair of battles fought near Pea Ridge in Arkansas on March 7th, 1862. After the rebuff the Union suffered at the Battle of Wilson’s Creek earlier in 1861, the Confederates had enjoyed a brief period of dominance in Missouri. However, the two senior Confederate commanders, one from Missouri (Sterling Price) and the other from Arkansas (Benjamin McCulloch), quarreled over the direction of the war, resulting in the splitting of the Confederate forces just as the Union army in Missouri was reorganized under a new commander (Samuel Curtis). Curtis took advantage of the Confederate disarray and pushed Price out of Missouri, taking up a strong defensive position along the Arkansas border. Meanwhile, however, the Confederates had been unified once again under their new overall commander Earl van Dorn, who was determined to outflank Curtis’ strong position. van Dorn divided his army into two wings and marched through the freezing rain for three days, eventually arriving behind the Union positions. Curtis learned of the Confederate flanking move just in time, however, and split his own force to deal with the approaching enemy columns. Their first contact came at Leetown, as Ben McCulloch’s troops bumped into Union troops under Colonel’s Peter Osterhaus and … Jefferson Davis. Yes, Leetown saw Union troops under the command of someone with the same name as the President of the Confederacy!

The situation as the two forces met, at about noon, is shown on the attached map (also containing the OB). Union cavalry emerged from the woods line to see an entire Confederate division marching in column only a few hundred yards away! Although heavily outnumbered, the Union commander Cyrus Bussey launched his troopers at the Confederates, hoping to buy the Union infantry time to deploy. The results were predictable, and 3000 Confederate cavalry over ran Bussey’s troopers and captured his artillery. As the Union troopers streamed back, however, the Union infantry and artillery began to deploy along the edge of the woods bordering Oberson’s Field, and along the ravines in Morgan’s Woods. The Confederates, meanwhile, deployed their infantry along Round Prairie and Little Mountain, with their (now dismounted) cavalry behind them, and advanced a few units towards Oberson’s Field. This will be the situation that we start the battle (so a bit different than shown in the map).

Historically, disaster now struck for the Confederates. McCulloch went forward with his pickets and was killed, and soon afterwards his replacement, James Mcintosh, commander of the cavalry, was also killed nearby. Meanwhile, the next most senior commander, Colonel Louis Hebert, had placed himself at the head of his infantry near Little Mountain and was unaware of these developments. The result was that the Confederate forces on Round Prairie were never committed in any organized fashion, and Hebert’s isolated forces were eventually overwhelmed by Union reinforcements when they tried to attack … and Hebert himself was captured. The resulting command confusion was more than enough to cause the Confederates to quit the field.

Scenario specifics
We will have some special rules to deal with the unique elements of this battle:
1. Bussey’s Union cavalry starts the game with only 1CV per unit (routed in the woods behind Oberson’s Field), and will have to go through a Formation Rally to determine what units can be salvaged.

2. At the start of the game, Confederate commanders McCulloch and McIntosh will both have to suffer one roll on the Leader Casualty table (modified, see below) – and they will not be replaced in the usual manner if they fall. Their respective commands are on Defend orders at the start. Leader Casualty Roll (d10): 1-5 = Fate is Dodged! No Effect, 6 = Unhorsed, out for 1 turn, 7 = Minor Wound, out for d3 turns, 8-10 = Killed!

3. Confederate commander Hebert must attach himself to one of his infantry units until he leads at least one attack, and (if circumstances force him to) will only detach himself and assume higher command on a roll of 1-in-6. Meanwhile, his command is on Attack orders at the start.

4. The Confederate artillery was never assigned to a particular commander, and remained in reserve. Each battery must be given a separate order (by the Confederate CiC, if there is one) to join a specific command before it moves from reserve.

5. The Confederate CiC, whoever he is, can only give one order per turn.

Victory Conditions: The key terrain in this game is the east-west woods line bordering the southern edge of Oberson’s Field (where the Union starts deployed on the defensive).

Battle report
We managed to play 16 turns in about 4 hours or so, which was a great pace (and included introducing two new players). In fact, since we played an average of 15 minutes per turn and the time scale was 20 minutes per turn, we played faster than scale – which is almost unheard of! I think the new rules are working fairly well, although I’ll discuss a few tweaks later. My main goal of
having the game move fast enough to see some “flow” to the battle seems to be on target.

The battle opened up with some mixed news for the Confederates – they had routed the Union cavalry and were organizing their assault on the still-deploying Union line, however their cavalry commander (McIntosh) was killed by a stray bullet at the opening of the battle! The “good news” was that their commander-in-chief (McCulloch), who historically was also killed at the same time, survived to command the main Confederate force, although he would have his hands full trying to issue orders to infantry, cavalry, and reserve artillery formations.

As the Union deployed along the wooded edge of Oberson’s Field and along some ravines on their right flank, the Confederates began their attacks. The rallied Union cavalry guarded the extreme Union left, while Greusel’s and Pattison’s brigades lined the fences along the field, and White’s small brigade occupied the ravines. Hebert’s Confederate brigade, boldly led by Hebert at the forefront, set off quickly through the woods to attack the Union position along the ravines. Meanwhile, along the Confederate center and right, McCulloch set about the lengthy task of deploying his commands in the woods bordering the fields, having withdrawn from the fence in the face of long range Union artillery fire.

While McCulloch was still staging his troops, Hebert managed to outflank the Union position along the ravines, using his greater numbers to pin the enemy and move around their exposed flank. White’s men recoiled back to the fence line, just as McCulloch’s troops marched across the field to threaten the main Union line, with the dismounted cavalry in the center and the infantry on the flank.

As the mass of Confederate troops closed in, the situation looked dire for the Union … however, just in the nick of time, the combined effects of Union fire and a moment of panic (i.e. “Mr V rolled a 3”) resulted in McCulloch’s infantry routing back across the field, their numbers so thinned that they ceased to be a threat. At about the same time, Union general Sigel arrived with a brigade of infantry on the Union right flank, just in time to stall Hebert’s successful attack. Although the Confederate dismounted cavalry and elements of Hebert’s brigade made a last futile attempt to break the faltering Union line (which was also on the edge of morale failure), they were thrown back – with the assistance of the previously routed Union cavalry, who had crossed the battlefield to harass their flanks! After this, the Confederates fell back to their starting line, rallying elements of McCulloch’s infantry and cavalry, and the battered Union troops broke off contact as dusk began to fall. The battle eventually ended about a half hour before nightfall … without the arrival of the Confederate Indian Brigade, despite 16 turns of trying to roll a “1 on a d10”! 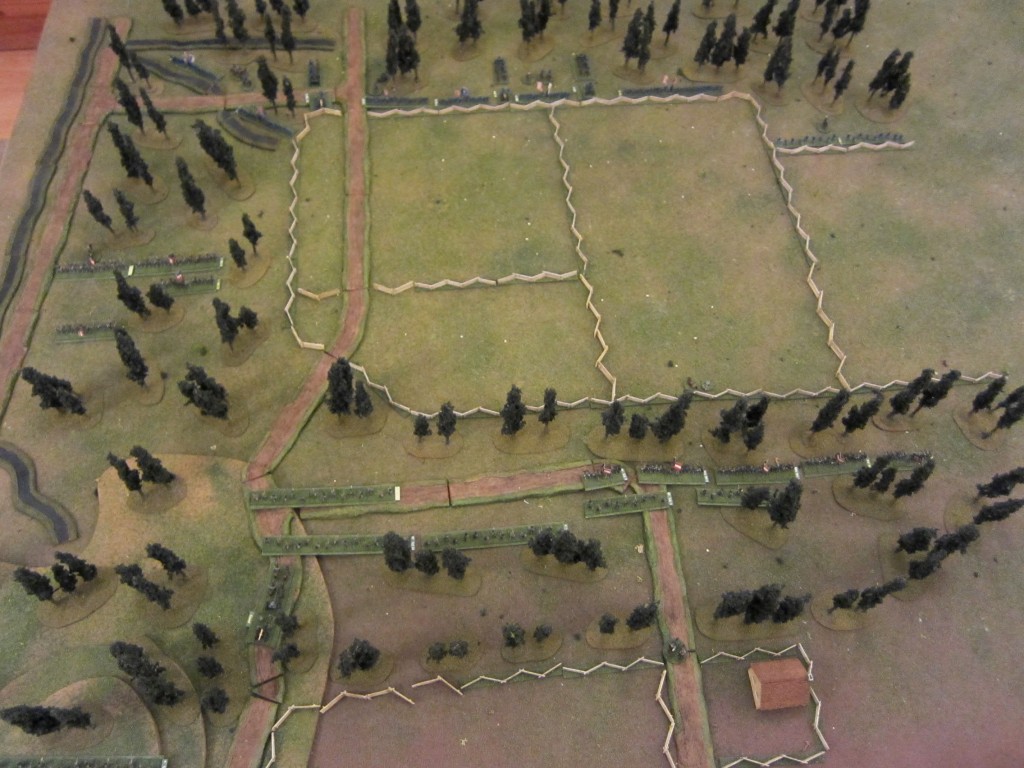 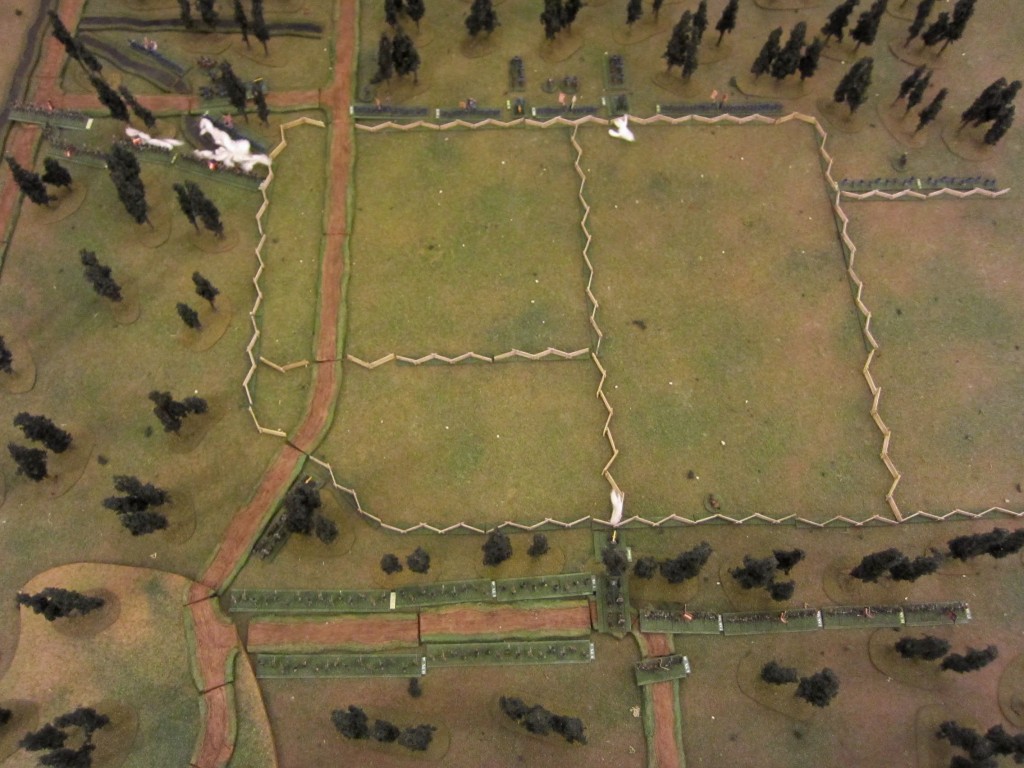 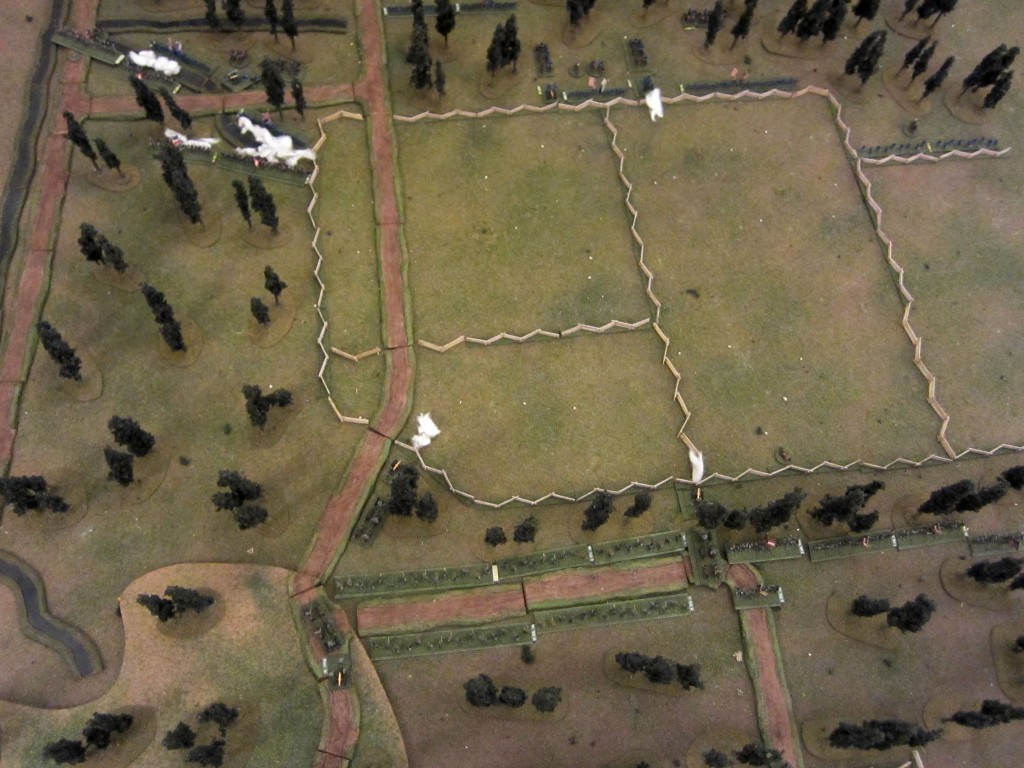 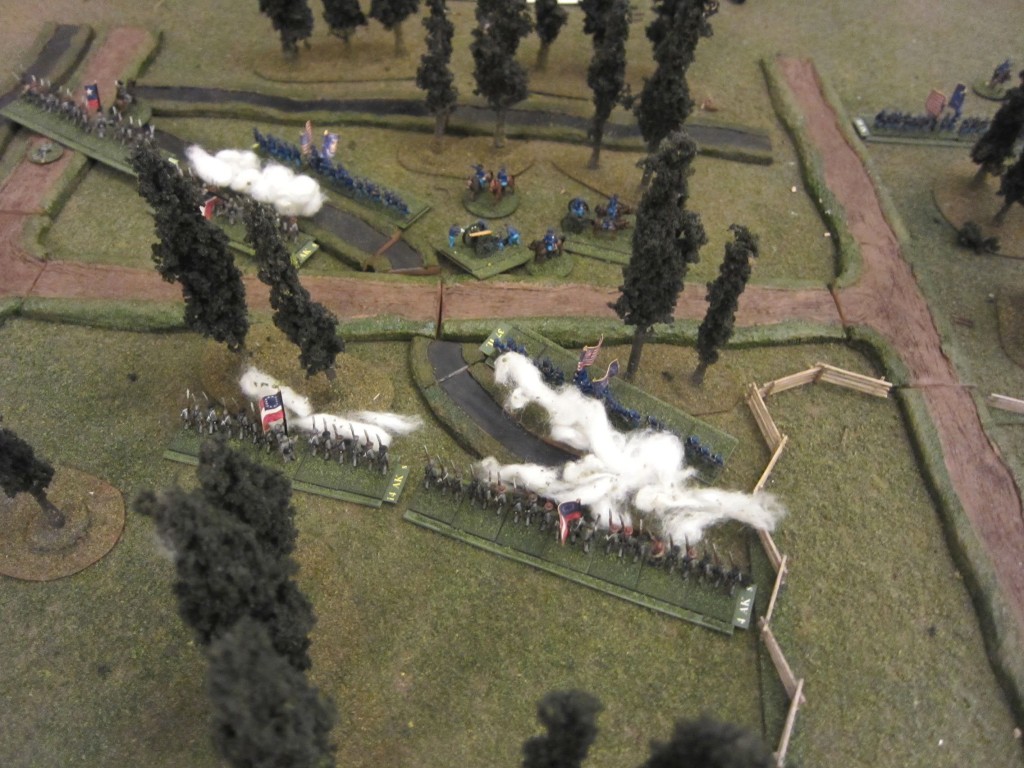 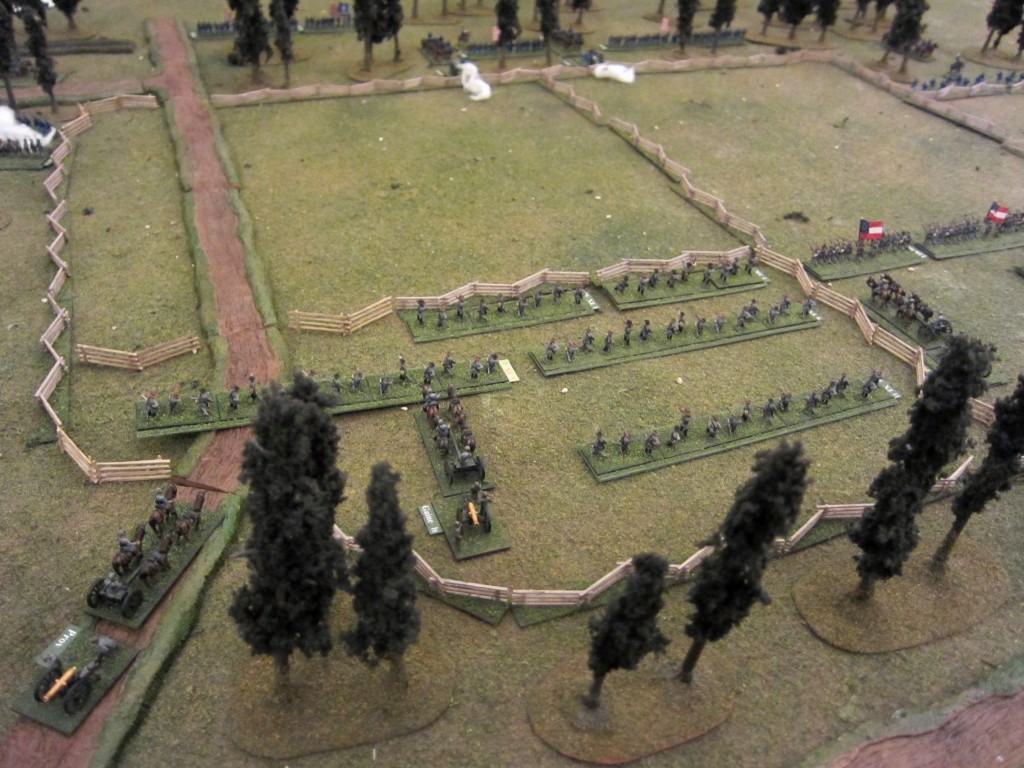 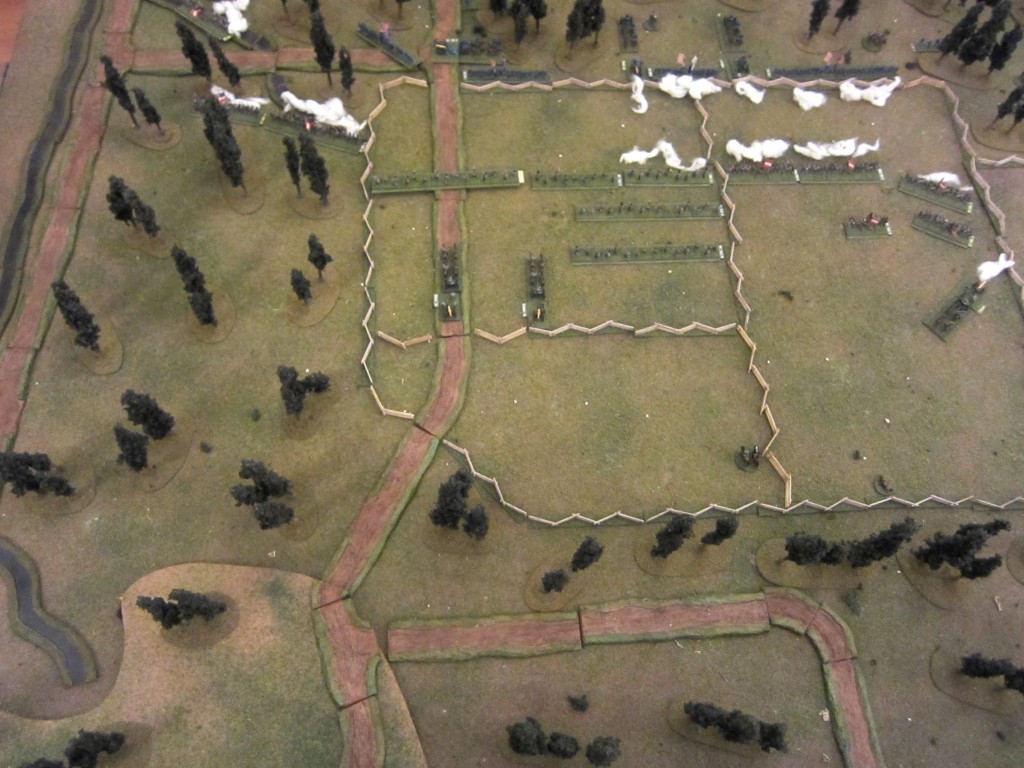 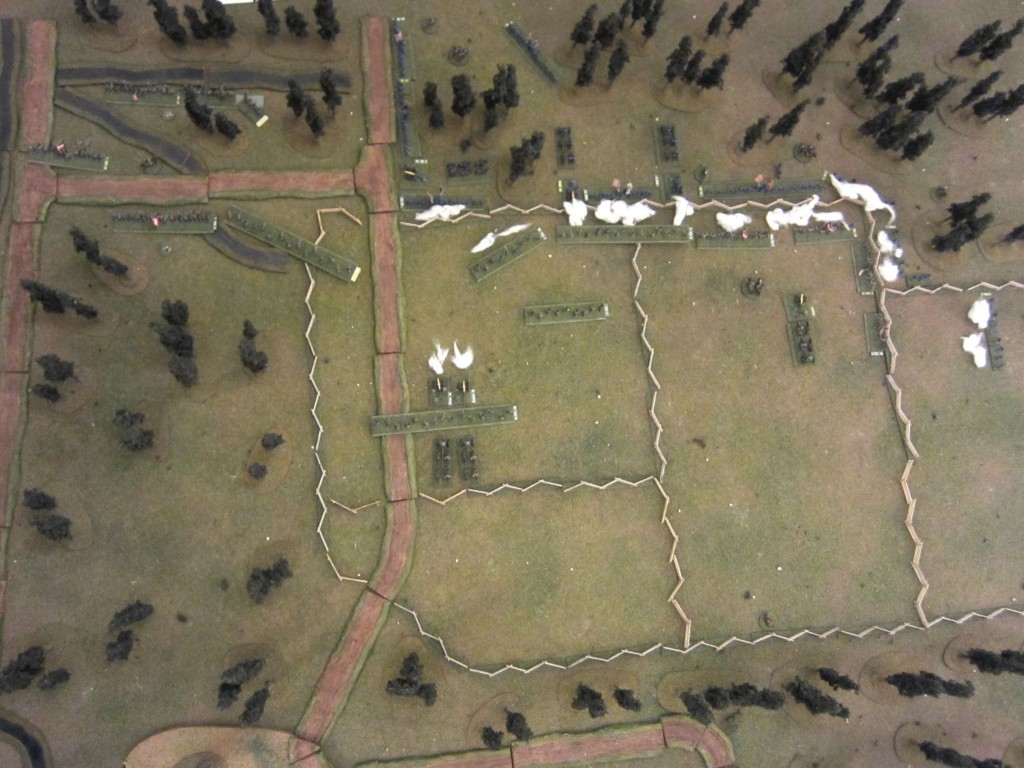 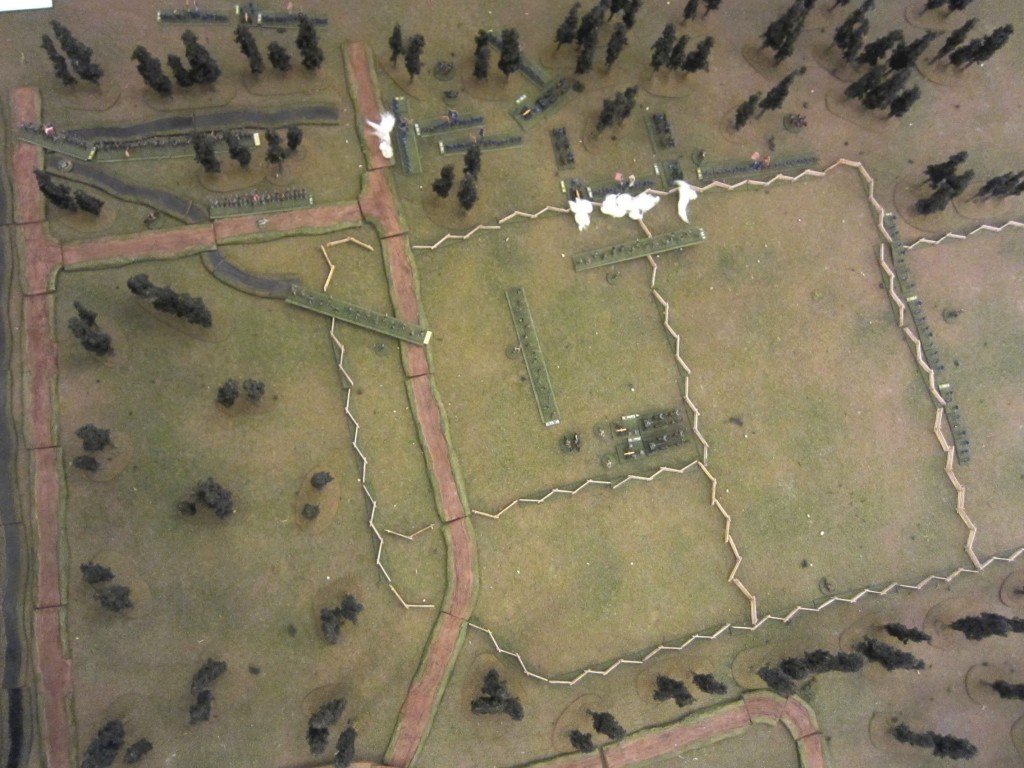 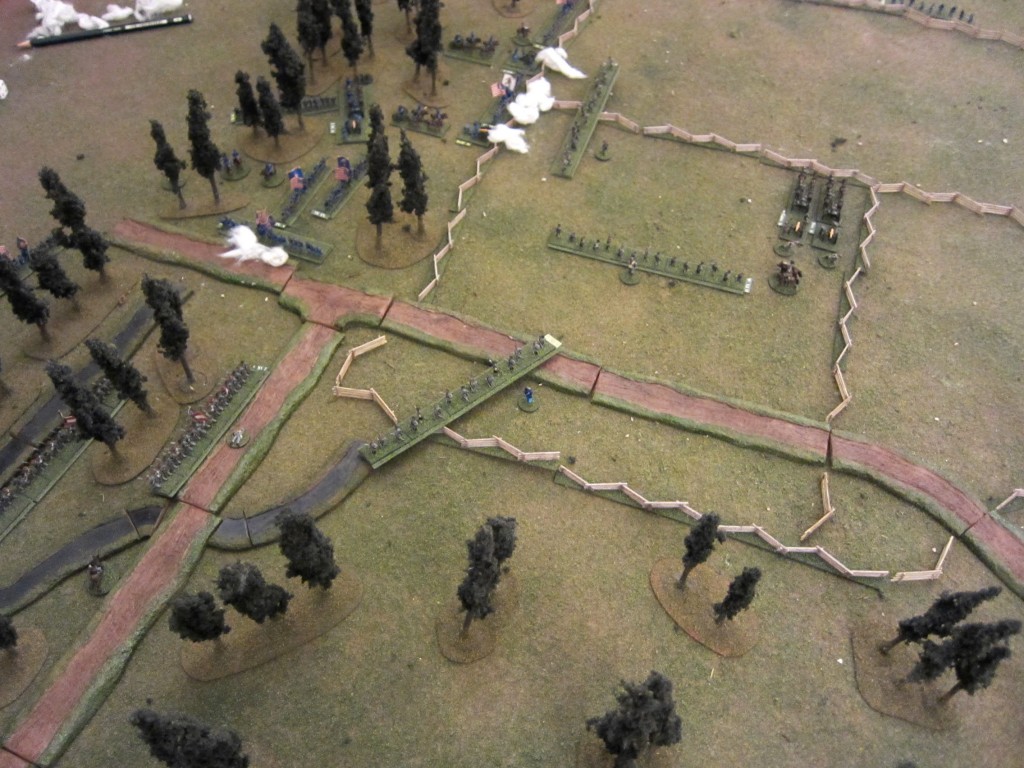 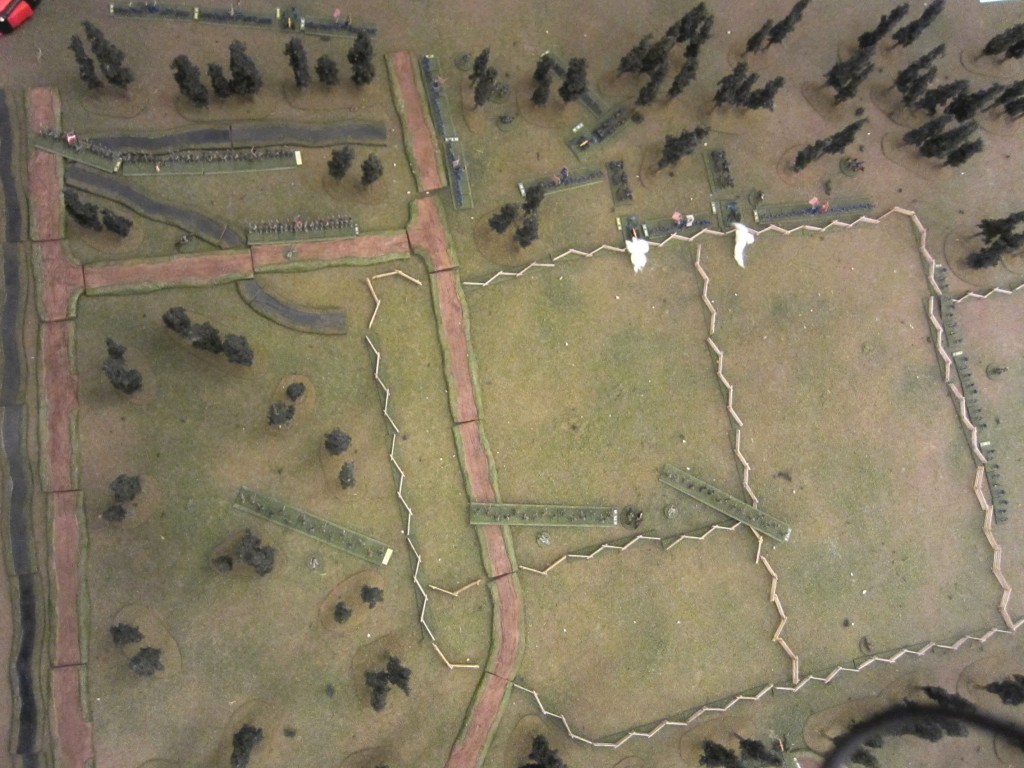 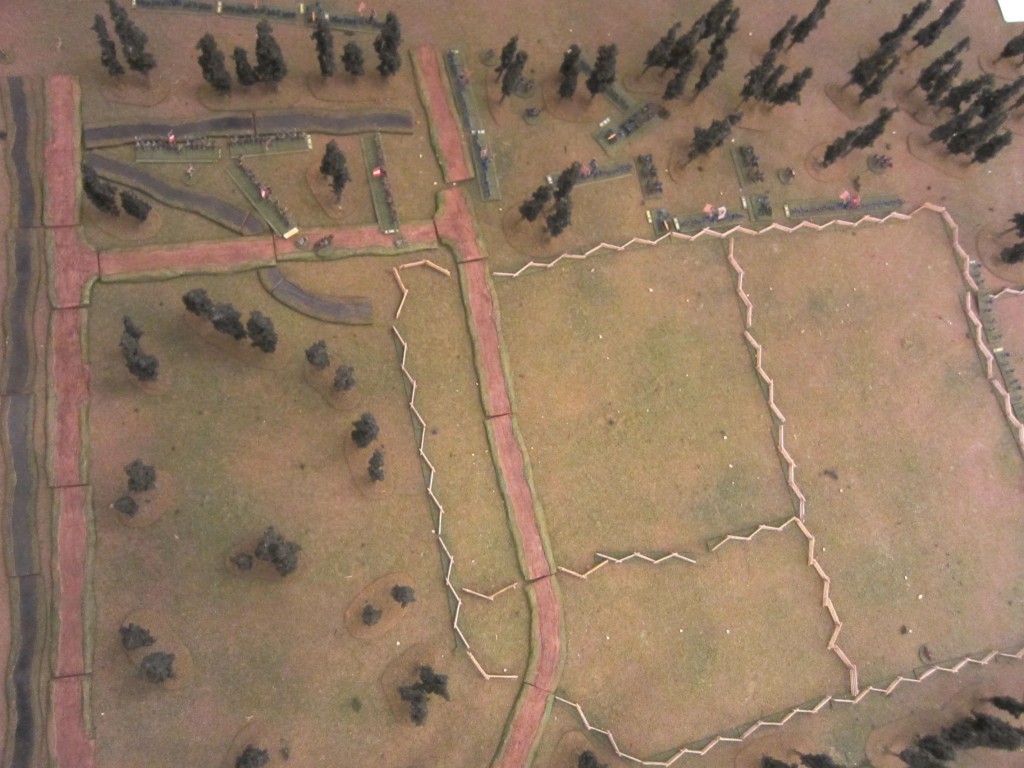 In addition to the usual gang Chris had also invited a newbie (Wilson) to the game and this was his first ever historical miniature game. Seemed to go smoothly for him.

One thought on “The Battle of Leetown”