When the idea of Russo-Swedish War of 1808-1809 project was first talked about the decision was to aim for as historically accurate terrain as possible. The 21 volume book Sveriges Krig Åren 1808 och 1809 had 19th/20th century maps for the battles. Lakes, rivers, forests, houses and so on have been clearly and well marked on the maps. In addition they give rough position of hills. The rough positions would have been about perfect for your traditional “styrofoam hills on a green gaming cloth”-gaming table, but we wanted to get more correct topographical feel to them if possible.

Modern topographical maps proved to be the solution. National Land Survey of Finland has whole Finland on the net at Citizen’s MapSite. Modern maps and the maps from the book were usually very good matches. Distances were about the same between distinct terrain features, relative positions were close etc. Combining the modern contour lines with old maps required quite a bit tedious work, tough. After experimenting with various ways of selection the lines in PhotoShop, conclusion that it was the most efficient to drawn out the line by hand was reached. Some attention was needed to see where modern day landscaping had taken place. For example one battlefield apparently had a ridge dug out for sand. So some “artistic talent” was needed. This was particularly true with 2.5 meter contour lines that were between the main lines (which are at 5 meter intervals) as they weren’t fully present. End result was a file just showed the contour lines at 2.5 meter intervals that could be combined with maps from the book. Low resolution sample: 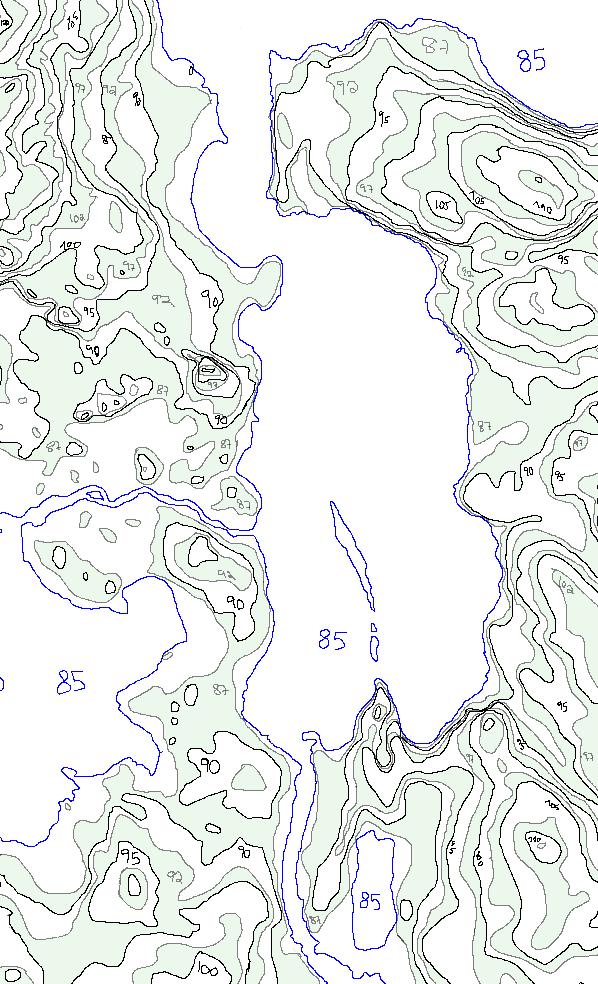 Just the modern contours lines were printed out on normal colour printer and the printouts were taped together to make one big 270x150cm map. This map was used a build up terrain.

The combined map (old map with contour lines) enabled us to model lakes, rivers, forest, houses and other features on the terrain in the right places.