Our club uses General de Brigade rules for the Russo-Swedish war. The information on these pages will help you recreate the battles on your own tabletop. For each of the battles you will find maps, orders of battle, description of the historical battle and a battle report of a refight by our club.

The battlefield in September 2006. The battle was fought astride an ice road on the frozen lake. 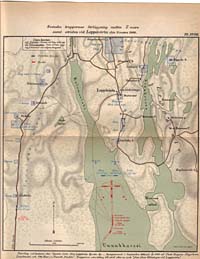 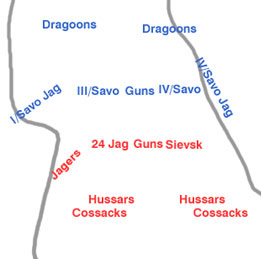 Finnish forces deployed on the frozen lake. Infantry supported by artillery formed a single line with small cavalry formations on the flanks. In the forests east and west of the lake were detachments of jaegers. The eastern shore has plenty of steepish cliffs which are several meters high. This makes it impassable to formed infantry and cavalry.

Russians arrived sooner than expected and started to deploy opposite the Finnish line.

The “battle” turned out to be only a minor skirmish, with two forces exchanging some scattered artillery and musket fire during the afternoon and cossack attempts to threaten Finnish flanks easily repulsed by Finnish salvos.

Under the cover of night Finnish forces, according to the orders, continued their withdrawal north towards Kuopio.

Apparently the Russians were somewhat hesitant to advance since their right flank in the east hadn’t frozen due to strong current. It is said that because of this several battalion commanders pleaded Cronstedt to crush the Russians with a flanking maneuver from west/behind. If all the troops of the III (Savo-Karelian) brigade that were present (some weren’t deployed) had been committed to this attack, their numbers would also have been superior to the Russians.