My Spanish 1808 army has many small one-off units. One of these intriguing formations is the lancers that fought at Bailen “Los Garrochistas de Utrera”. This unit is fascinating as it was raised from the mounted bull-fighters, and they wore their normal work-gear into battle. I ordered a bag of Battle Honors Spanish Lancers BSP9 for these troops, but unfortunately the figures are completely wrong for this unit. So I had to do a bit of converting to get my hombres on the table. 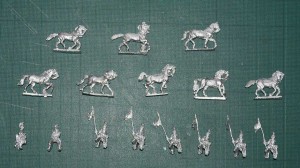 The original figures are good castings, but are probably best used for depicting lancer in the pro-French army of King Joseph. The horses are nicely animated and have lots of variation. The troopers are mostly identical, and the pack has two different commander types – one with a saber and a trumpeter. I decided to do a fairly light-weight conversion for the troopers, changing the headgear from helmet to wide-brimmed hat, removing shoulder straps and replacing the cast lances with brass wire. I did not bother to carve away their carbines or sabers, but left them in place. 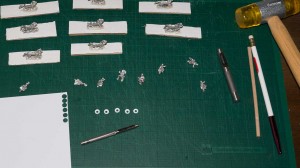 I carved and filed away the crest of the helmet. The brim of the hat was thin plasticard. I used a hollow punch to cut out the shape of the hat and the hole in the middle for the filed-away crown of the head to poke through.

A set of hollow punches has proven to be a very good investment. I use it a lot to punch out small round markers to glue on unit bases, using different colours to indicate to which larger unit a stand belongs to, or individual stand capabilites – for example red for automatic weapons in my Force on Force figures. 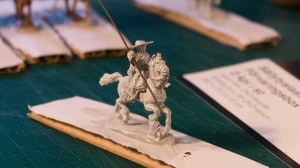 I cut away the lances and drilled a hole for a brass wire replacement. I usually try to replace thin flag posts and lances with thin brass wire, as I hate how the white metal shafts always bend and break away in the heat of the battle. The figures were primed with white, and painted to match the usual pictures I’ve seen online – green jackets and brown hats. I used two or three variations of green, to get the usual variety I like in my troops. I left the officer figures unmodified – I thought the chaps probably passed the hat around to get some properly martial gear for the jefes to impress the senoritas, and maybe the men in charge are from the regular troops, or ex-servicemen, or something that warrants them to have a bit more army-like look.

The figures were shaded with painted-on Army painter dark dip, highlights were added. The bases were covered with coarse pumice paste with a bit of sandy brown paint mixed in, some darker spots were painted, base was drybrushed and grass tufts added. Sorted!

Albatros D.III – Model of the Day

One thought on “Spanish lancer conversion”