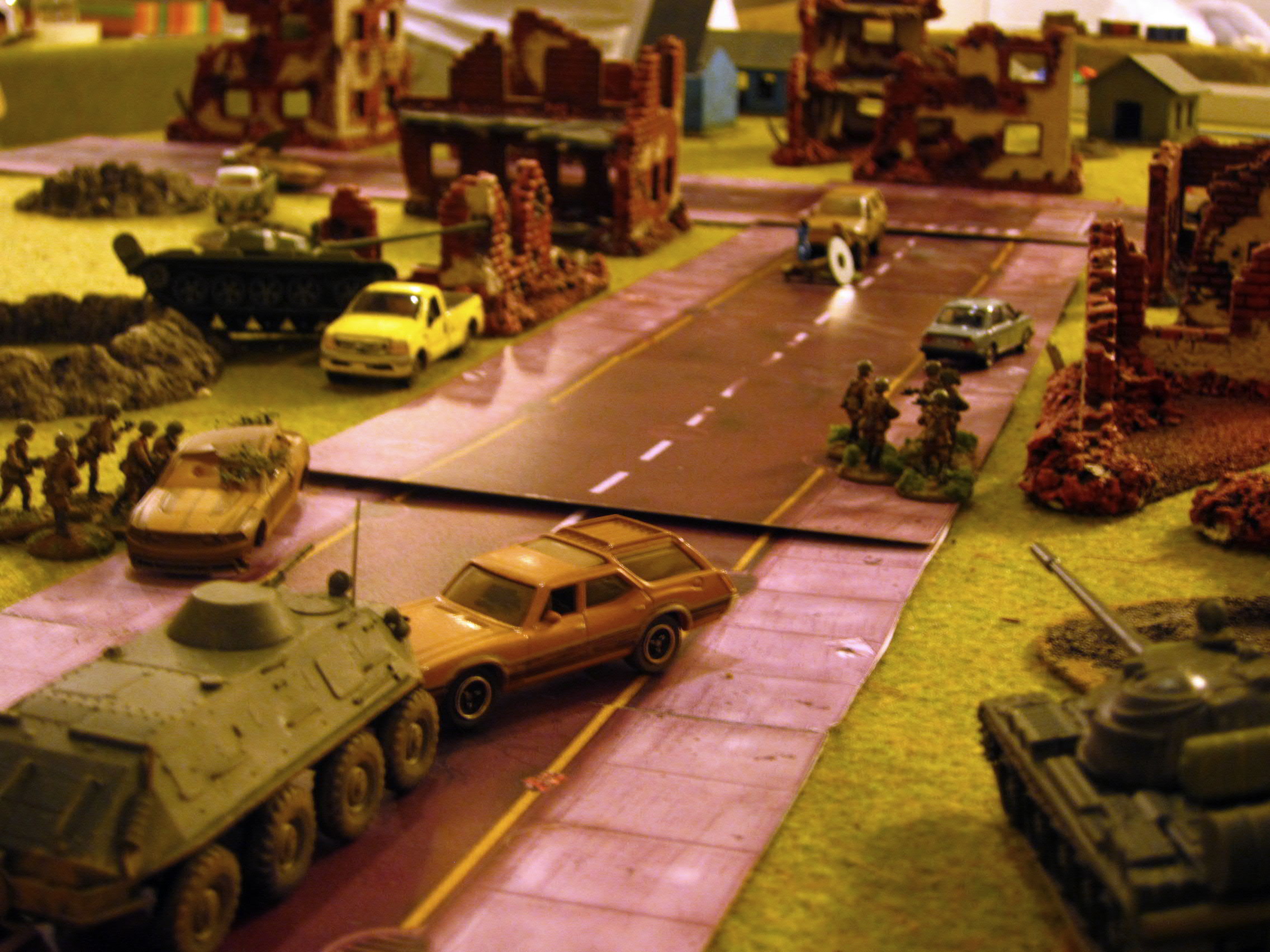 Janne N had once again brewn a nice and very topical scenario for 20mm FoF that managed to have four separate sides with different objectives.

Our stage is a quiet if more than somewhat bombed out Syrian rural town. 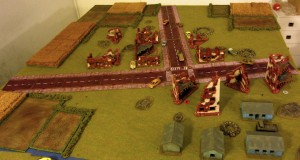 A closer look reveals little activity. There is plenty of ruins, car wrecks… and what looks like a truck still in remotely working condition. 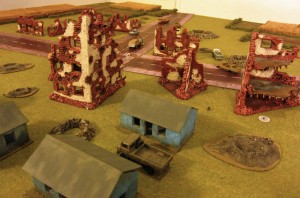 Suddenly there’s a blur of activity as a mechanized platoon of Syrian troops enter the area from left with their reinforcements, a platoon of T-55s. They have orders to clear the area from insurgents. The government troops are supported on the right by Palestinian volunteers (can’t recall were they Hamas or…?). A firefight instantly erupt from the ruins next to the volunteers who reply in kind. 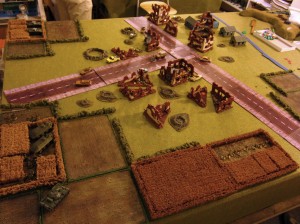 IIRC there was some activity in the ruins thus giving the tanks targets and they immediately commenced shelling indiscriminately wrecking havoc on the few units that were capable of harming them with their RPGs etc. Meanwhile the volunteers entered the ruins and were constantly exchanging fire with the insurgents. 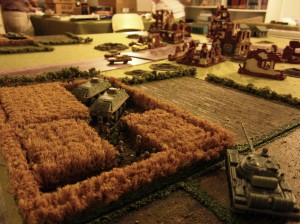 After giving the insurgents a long shelling and forcing them to retreat the government troops start advancing. 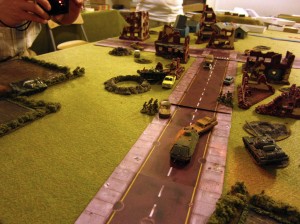 During the fighting also some reporters (near the crossroads by the van) were unfortunately killed. No no actually targeted them on purpose. No, really! 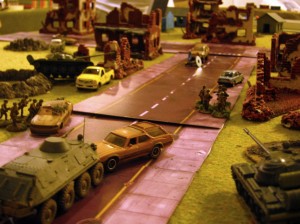 The government troops got some casualties as did the volunteers who after one point didn’t really seem to be doing much anything any more. The insurgents were driven to the other side of the crossroads and the few remaining troops they had kept on retreating methinks.

Government was just doing up some brutal cleaning up and insurgents were resisting them. Volunteers were special unit sent to rescue a VIP who had been captured and held hostage by the insurgents and didn’t feel like getting more casualties after they managed to free to hostage up, whom they actually found amongst the insurgents of the first ruins they assaulted! The miniscule Brit team was “observing” which is to say occasionally trying to help out the insurgents, but this fell short when their CO got killed (they have a tendency to do that as the same happened in the previous Libya game by the same GM) and fell away with the insurgents. Luckily for the government troops they didn’t manage to call air support. In the end due to some activity that nearly resulted in friendly fire the government troops and volunteers nearly started exchanging fire too.

Again a brilliant scenario from Janne N, probably wasn’t that fun for Eero who took plenty of pounding. Then again, had he actually managed to open up first against the tanks with the anti-tank weapons the outcome would’ve been rather different. Certainly not evenly balanced scenario but conflicts rarely tend to be that way in real life…

Janne N brought the visually enhancing wrecked Matchbox et al cars and Eero brought the tanks and probably the cardboard roads, which worked much better than I would’ve guessed, too.