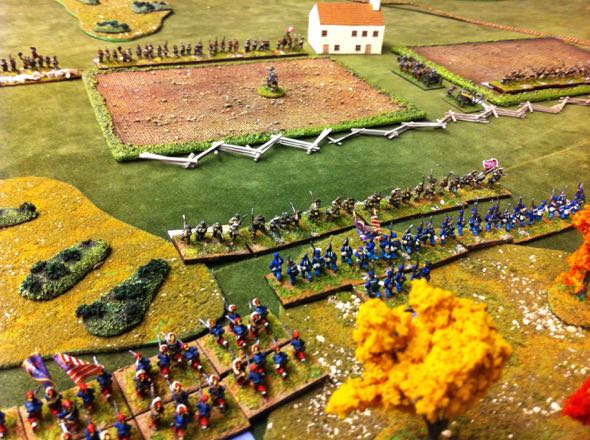 We’ve been playing a Longstreet campaign for a while now. At the moment, around mid-1863, the Union has an unbroken record of defeats. We started with five players, now that we are half way through we still have four eager generals actively playing and enjoying the campaign. We’ll try and put up decent after action reports in the future, so far we have only managed to take a few snapshots and write a few reports.

In a rash attack the Union forces tried to envelope the Confederate lines and take the crossroads of Tobacco Road Tavern. The flanking forces got stuck in the uncharted swamps of the Virginian countryside, and suffered grievously in the hands of Southern mounted cavaliers. The Union advance was faltering and the Southerners launched a glorious mounted charge uphill against a battery of artillery and regiment of Zouaves, sweeping all before them. This threw the Union high command into confusion, parts of their infantry line (Harrisburg Vols) advanced from the defensive positions they had taken on a bank of Tory Town Run, and the blueclad men were thrown back with a resounding rebel yell. This, combined with the continuous withering skirmish and volley fire raking the lines was enough to force the Union army to retreat from the field. The Confederates did not escape without casualties, the Union firing lines felling many a young man before the firing ceased along the line.

This was a battle with Giraud against Clarence Woodster. The Pennsylvania lads charged straight into the Southern Defensive line, while cleverly trying to flank the enemy position with a regiment of cavalry. It almost worked, but true to form the Union losses mounted up and the Northern morale broke.

A battle that ended with the losing Union general gaining an amazing 14 Epic Points – it helps if you launch a couple of massive charges and get your name into papers afterwards: