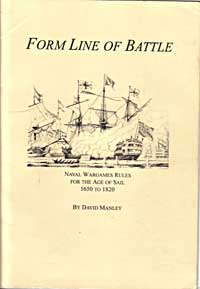 This ruleset by David Manley, published by A&A game engineering, is probably the best napoleonic naval set we have played.

This is not a simultaneous move or fire game, which makes it easy to control fairly large fleets. Turn order is determined by draw of cards, each side has three phases and three cards in the deck. Player’s first card starts the first phase – the command phase, where admirals can give orders, ships load their guns and attempt repairs and all other administrative things happen.

The following two cards are action phases, where ships move and fire. If things go well, a side can draw all of its three cards and get to act before the other side.

Movement is quite regulated, yet randomised, each ship has to throw a number of d6, based on wind direction and ship maneuverability, to determine how far it can move. The player has to decide whether to use all of the dice, or just one. This causes all sorts of chaos and fun in the battleline, when some ships move faster than others. All ships have to first move straight ahead and then turn. Ships of the line turn max of 45 degrees, frigates etc max 67.5. (Corrected angles after comment by Kaptain Kobold).

Ships can fire each broadside once during a game turn. Movement and fire is defined so that ships can fire before they move, after they move but before they turn, or after they turn. Fire arc is 60 degrees or so. After one side has completed one of it’s actions, the non-acting side can fire.

Damage affects in most cases the ship’s morale and ability to fight effectively, the ships rarely sink in a game. All ships have broadside values and hull values (10 for a normal 3rd rate) plus some additional class and quality modifiers. Fire is resolved by adding tactical and range modifiers to a ship’s broadside value, then deducting the hull value of the target. This value is cross referenced with a value of rolling 2d6, and looking up the result in a table. The result is the number of broadside factors lost by the target and possibly critical hits like masts falling or rudder damage. Well placed hits also reduce the hull factor of the target, making it more vulnerable. When the broadside falls to zero, the ship has to surrender.

There are all the normal provisions for raking, collisions, boarding, nice critical hits and all sorts of detail, which makes for a very enjoyable game. Five thumbs up!

2 thoughts on “Form Line of Battle”