Force on Force is our favourite skirmish ruleset for many reasons: it’s fast to play, you don’t need a massive investment to start playing, the core system is elegant, and it is good for a wide range of scenarios. However, they certainly would benefit from a little bit more clarification and proof-reading. Based on our observations on how other clubs play the game, and on the discussions on the Ambush Alley forum, people have adapted the rules to their own style of play.

Here is a list of the house rules and clarifications we have used in our games:

[quote]Reaction checks – Initiative player gets to act with his unit before the losing enemy units react.[/quote]

The action-reaction cycle is the best part of the rules, but it took a lot of wrangling before we got to grips on how it should work. The way the rules are written did not make sense to us, and we eventually arrived at the following mechanism to sort out who acts when:

1. Initiative player announces the action: The German team A wants to move to the UAZ 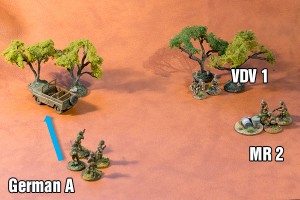 2. Non-initiative player announces reactions: VDV team 1 and MR team 2 both want to shoot the Germans before they reach cover behind the car.

4. Reacting units that win get to act. VDV team shoots down one of the Germans, they decide to keep running instead of returning fire. 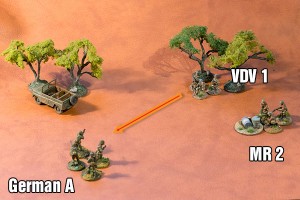 6. The losing reacting units get to act. MR team 2 and Germans exchange a round of fire, nobody hits anything. 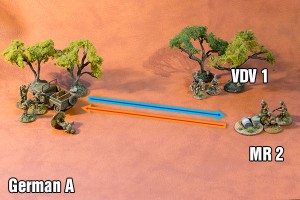 So, what’s the point of this rule clarification? Well, according to the rules you start resolving the action-reaction cycle with the enemy units that lost their reaction roll, in this case the MR2 that “in reality” would only get to shoot after the jerries are already behind the jeep. And after this you’d resolve what happens before they get behind the jeep. The way we play just made more sense to us, we are not saying that this is the only way to play the game.

Stealthy units have to move at tactical speed if they want to stay hidden.

Standard warheads in RPGs are not really meant for shooting down infantry running around in the fields, so we only give them a +1 bonus die against troops in the open, neither do anti-tank weapons teams get the +2 team bonus against infantry targets.

Older tanks with poor optics have to spot the enemy every time they try to fire. This rule modification we picked up from the rules discussion forum.

We like to use the medic rules from Ambush Valley: Vietnam 1965-1975 – soldiers suffering from heavy wounds will probably die unless they get to a medic, and medics can also patch up smaller flesh wounds.

the rigid Soviet training requires units to see a company commander to move forward. In our games Private Partski can move forward if he can see his squad leader who can see his platoon leader, who can see the company commander. If Partski can see any of the higher level men, that is also OK to get the motivation to advance against the Western oppressor. We also usually grade the squad leaders one morale level higher than the grunts to give them a bit more reason to be in the game.

We don’t give MP armed vehicle drivers and commanders the additional bonus die for their weapon. In our first 1984 games the Soviets were complaining (quite loudly) when crew-members had to abandon their tin-can M113s, and promptly proceeded to waste all nearby comrades with their trusty UZIs.

Figures in the example from Sandsmodels and Elhiem, UAZ by Sandsmodels, trees from Woodland scenics, objective marker scratchbuilt.

One thought on “Force on Force – our rules”