We wanted to see howForce on Force would work with slightly larger scenario and so we gave it a try with couple of mechanized Sov platoons reinfrced with a tank platoon. Defending against the red onslaught was a platoon or so Germans. More or less  in the vein of our Germany 1984 FoF Campaign.

We didn’t notice any new problems during the game and the flow was pretty darn good.

Overview ofthe table with Soviet attack beginning in the bottom. 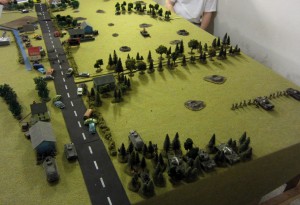 Soviet troops hunkering behind a house. 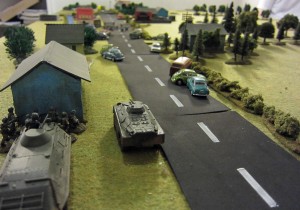 Infantry has secured the crossroads and tanks trundle onwards. 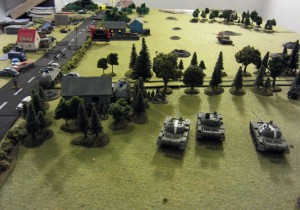 I seem to recall that the Soviets didn’t make it much further than the crossroads. If my memory serves me well there was a FO in the the 2nd floor of far off white building with a red roof by the road that proved especially bothersome.