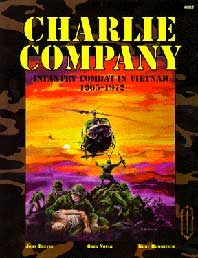 In Charlie Company each figure represents one man and each player usually plays with just one squad that has more or less 10 men (usually much less…). What makes this game different from others is that all players play American troops and game master plays the opposing NVA/VC troops. This built in blind system enables the game to proceed faster as only those NVA/VC troops that are visible to US forces are placed on board.

Even though the game can be played as individual battles it is recommended to be played as a campaign to give more feel to the era. In the campaign each player is represented by one squad leader directing actions of a squad. Each battle of the campaign represents one month´s time &quot;in country&quot;, perhaps its most hectic battle and its results and casualties reflect on upcoming campaign months. The obvious purpose is to survive through the one year´s tour of duty. With enough players one can simulate bigger unit operations and in my own games I´ve GMed a campaign with five players, where one of them acts as the platoon leader.

The length of turn in the game can variate between one and five minute turns. While the situation seems safe the longer ones are used and when the action starts the shorter ones are used. The turn sequence is quite traditional. First orders and request for support fire are given, movement is executed, direct fire is resolved, indirect fire is resolved, results for the whole turns firing are applied, possible close combats are fought and lastly there is communications phase where players are given chance to communicate with other players IF their miniatures are close to one another or both have radio operators. Sometimes the game can be played even in real time. Also note that there are no morale rules as players themselves can give more belieavable and interesting results if there is any risk involved for them or their squads than any morale rules!

There are four different movement types available for each turn and this has an effect to the distance the squad can move, how effectively it shoots and how much cover it uses. When firing six sided dices are thrown and 5-6 is a hit. The amount of dice thrown depends on the armament, the movement types of the shooter and the target and the terrain the the target is in. Hits scored on Americans are resolved quite thoroughly while those scored on Vietnamese are handled in a more general way.

The basic grunt might serve his tour in Vietnam without ever seeing any tanks. This is also reflected in the game which concentrates on the infantry, but does contain more than enough rules for them if need ever rises. Naturally there are rules for helicopters, air support and artillery etc. A vast number of different troops and equipment were involved in Vietnam war and the minutae simulation of each and every one of them in squad and individual level has not been considered to be that important to an infantry game. There is however quite comprehensive data and rules for unusual equipment and uncommon troops, such as South Korean marines. Also included are charts for creating missions.

All in all quite nice miniature game, that needs only small investment on the miniatures. By adding some roleplaying elements one can make a campaign more interesting. To avoid optimizing, players can also be kept in dark of the main part of the rules, except movement rules, without the game really slowing down.