Backround
As the Confederate commanders McCulloch and McIntosh were busy getting themselves shot at the battle of Leetown (and the sole remaining senior Confederate commander on the field, Hebert, tried to follow suite but only managed to get himself captured), the Confederate CiC, Major General Earl van Dorn, was busy … well, no, he wasn’t busy at all. In fact, he encountered a small Union blocking force around the Elkhorn Tavern road junction around noon, about the same time that the battle of Leetown began with a furious cavalry action as vedettes from the opposite sides ran into each other. However, van Dorn was unsure of either the situation of his army or that of the enemy, and was literally caught in a hole (a series of steep ravines), and thus took four hours to deploy his men, fight off some Union spoiling attacks, and finally order the attack. By this time, rather than outnumbering the Union by 3:1, he only had a 3:2 advantage. The game begins at 4:00 PM, and it starts to get dark around 7:00 PM, so the Confederates will have less than a dozen turns to capture the vital road junctions around Elkhorn Tavern and Cleman’s Farm.


Scenario specifics
The map (also containing the OBs) shows the situation around noon, when the Union reinforcements were just about to come up. Over the next four hours the Confederate dispositions changed only slightly, but on the Union side Dodge’s brigade concentrated around Cleman’s Farm, three batteries were deployed in front of Elkhorn Tavern itself, and Vandever’s brigade deployed from Elkhorn Tavern to the slopes of Big Mountain.

Note that the terrain is very rough. The streams are in fact a series of ravines that divide the Confederate position (although they may be a bit narrower than portrayed here), and the entire battlefield (except for the fields) is covered in light woods. The slopes are particularly uneven and rocky, and artillery may only deploy on “flat” ground. Fans of under-gunned, light caliber batteries with Green crews will be happy to see that the Confederates field several of these wonders, however they also have a pair of Veteran batteries – yee haw!

In order to win, the Confederates must capture the two road junctions near Elkhorn Tavern as well as the Road junction near Cleman’s Farm. If they capture two, the game is a draw – otherwise it is a Union victory.


Battle Report
The second of the “Pea Ridge” battles at Elkhorn Tavern proved to be a wild and bloody affair, with the Confederates pressing hard to capture two of the three vital road junctions, and the Union barely rallying around the last line of defense to pull out a draw. Mikko, Mr V and Janne and I started moving things a little (maybe one turn?) around 5:30, but I don’t think we really got started until around 6:00 or 6:15, and I think we ended around 9:30 or 9:45. So in 3.5 or 4 hours we played 10 turns (around 3.5 hours of “real time”). We’re keeping up the pace of playing the games at close to real time, which is great, and really results in a lot of action as formations maneuver, fight, break, and rally. Overall, despite the (once again) horrible terrain, with almost the entire board covered in woods, ravines, and steep hills, I’m very happy with the pace of the games.

The battle opened with the two sides already in engagement range, or less than 9″ (450 yards) apart. However, since both sides were deployed in the woods (visibility 2″), there was room for discretion on when to actually start fighting. The Confederates outnumbered the Union troops, and decided to use those numbers to outflank their defensive line on both sides. On the Union right, the Missouri State Guard (Mr. V) moved up to engage Dodge’s Brigade (Christopher) around Cleman’s Farm. They found the Union infantry had constructed hasty fieldworks at the opposite end of an open field, and wisely chose to bring up their artillery to wear them down, but also pressed the Union flank with their dismounted cavalry. However, the Confederate cavalry (armed with their trusty shotguns and hunting rifles from home) were outmatched by the dismounted Union cavalry (armed with new-fangled breechloading carbines), and after a brief encounter withdrew to await infantry reinforcement.

Meanwhile, on the Union left, the Confederate 1st and 2nd Missouri Brigades (Janne) chose to avoid the massed Union artillery in front of Elkhorn Tavern (masking it with dismounted cavalry), and instead launch a running flanking maneuver over Big Mountain. This forced Vandever’s Brigade (Mikko) to rapidly back-pedal back across Big Mountain. Although Vandever was supported on his flank by more Union cavalry, the Union battle line eventually resembled a “U” – bent back on itself from behind Cleman’s Farm to Elkhorn Tavern and back again beyond the fields around Ford’s Farm and Ruddick’s Field. At this point the Missouri State Guard had started to pressure Dodge’s brigade, with its massed guns wearing down the Union infantry behind the fieldworks and formed infantry pushing back the beleaguered Union cavalry on the flank.

And then, just in the nick of time, Union reinforcements arrived! Asboth’s small column (played by Asko in his first game) marched up the Cleman’s Farm path to take the pressure off Dodge’s Brigade, unlimbering his artillery on the road and marching his infantry up to stabilize the line. On the Union left, Vandever’s brigade also appeared to have finally stabilized its position along the spur of the hill and fence lines of the fields.

But perhaps “stabilize” was too strong of a word … By this time, formations on both sides were Shaken and their morale was being tested. First to break was Dodge’s brigade, which opened up the first road junction to the Missouri State Guard. As the remnants of Dodge’s brigade withdrew through Elkhorn Tavern into the fields beyond, the Confederates increased the pressure on the batteries around Elkhorn Tavern. These too were eventually forced to flee or withdraw, and the Missouri State Guard took possession of a second road junction. However, this proved enough of a fight for the Missouri State Guard, and a morale failure resulted in the majority of their troops “heading home to report victory” as well. Meanwhile, on the Union left, the two Missouri brigades were finally pressing the fight home, however Slack’s small brigade on the flank also broke and headed for the hills. This left the remnants of Vandever’s Brigade facing the powerful Second Missouri Brigader under Little, and the Union troops were eventually pushed back from Big Mountain with heavy losses.

By this time, however, Dodge’s brigade had rallied and joined Asboth’s columns to establish a new line around the last road junction, and Vandever’s brigade withdrew to this line. Darkness had started to fall, and although the Confederates took a breath to rally the First and Second Missouri Brigades, fighting eventually wound down with the Union forces still hanging on to their final defensive line.


Below’s the pictorial of the game with a photo taken after each side’s turn. Some closeups of certain turns are also provided. Reader’s ahoy! Are these clear enough to follow the game (accompanied by the battle report above) or should we start adding  unit names (at least to initial pic) and maneuver arrows? 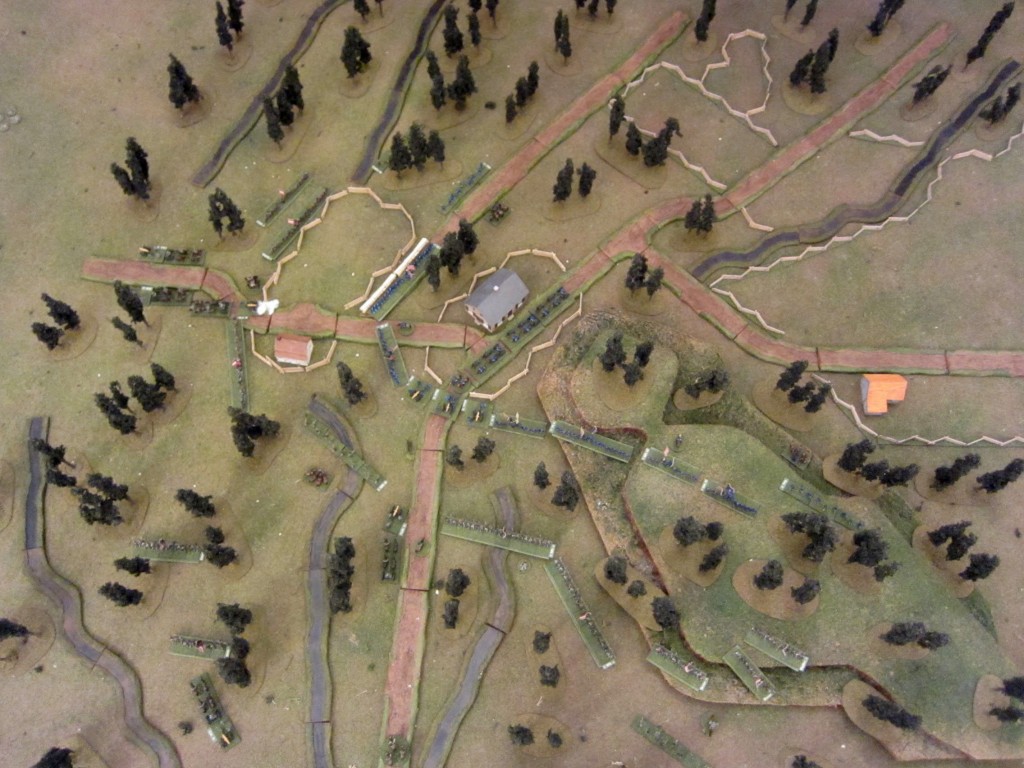 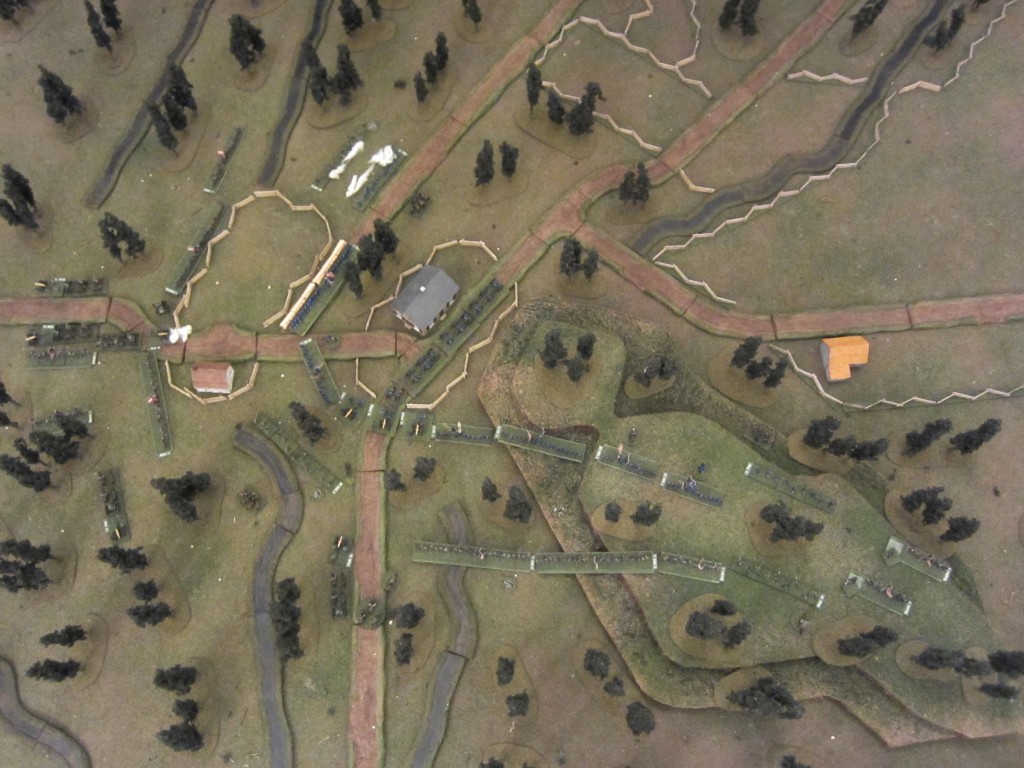 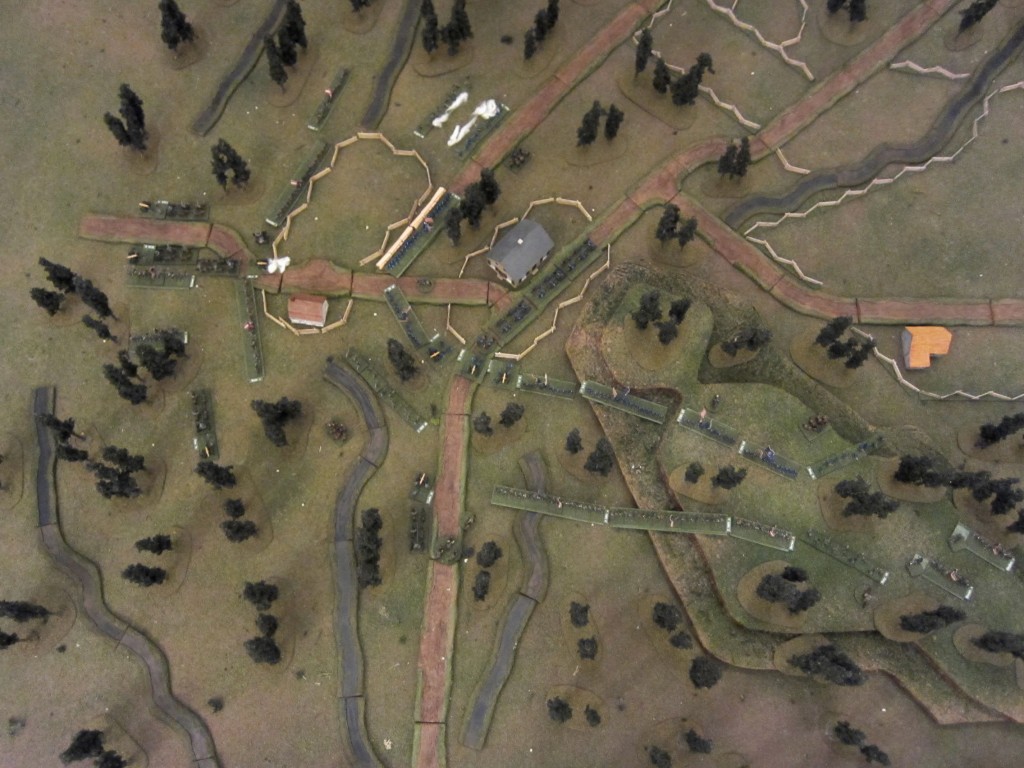 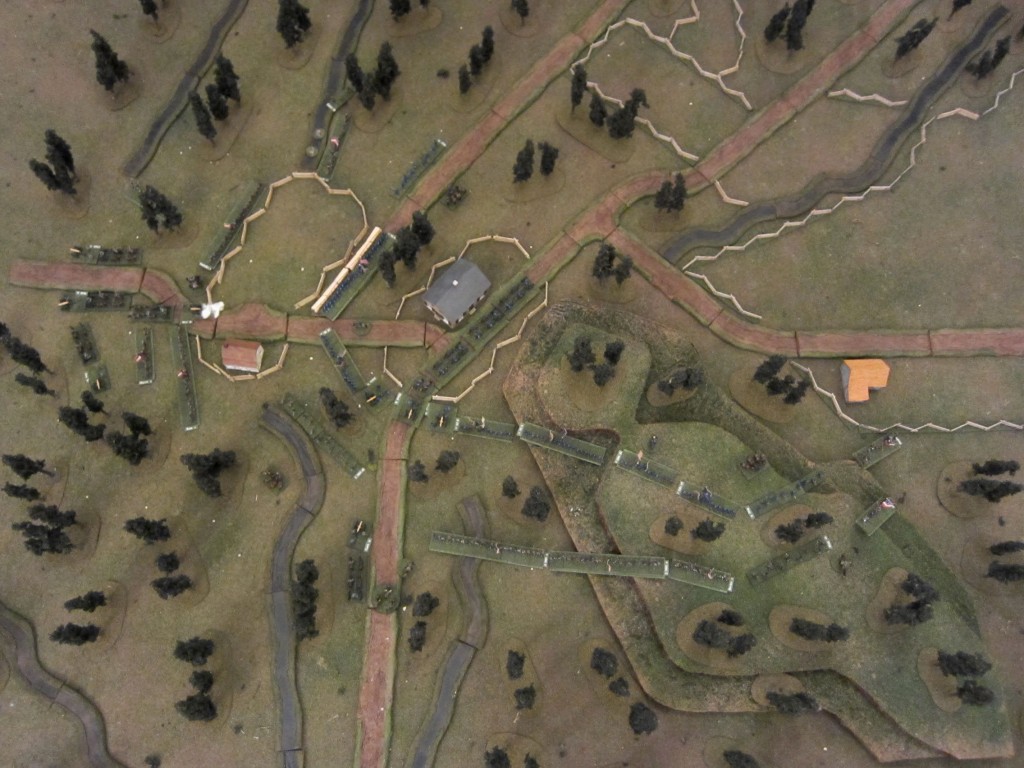 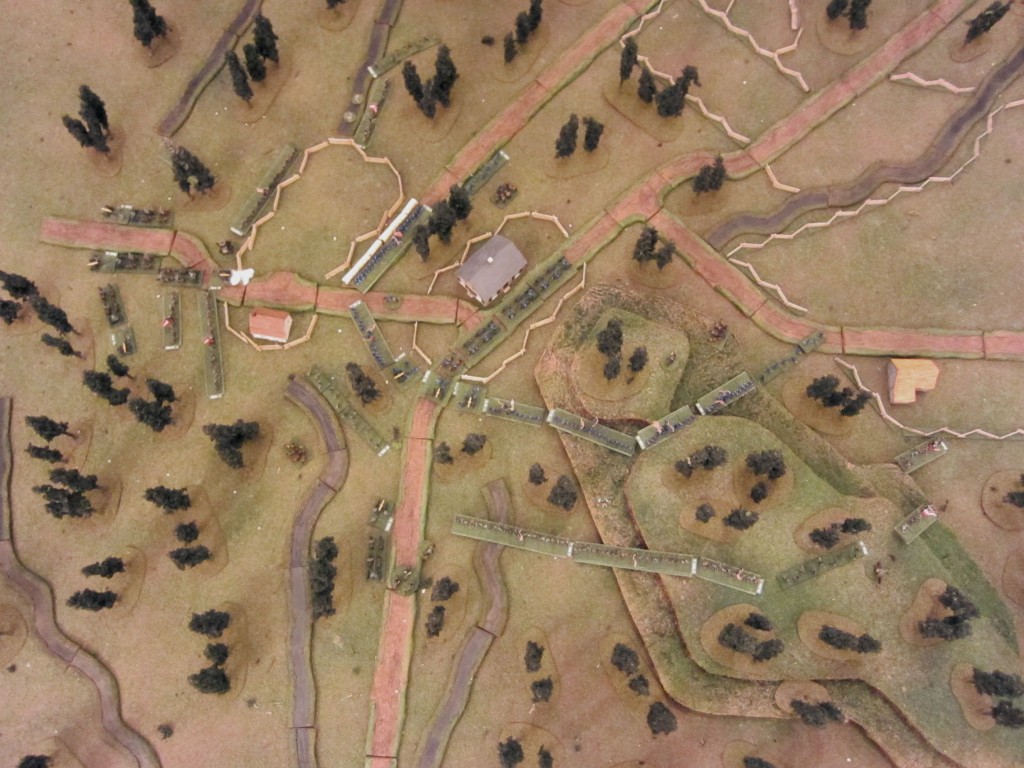 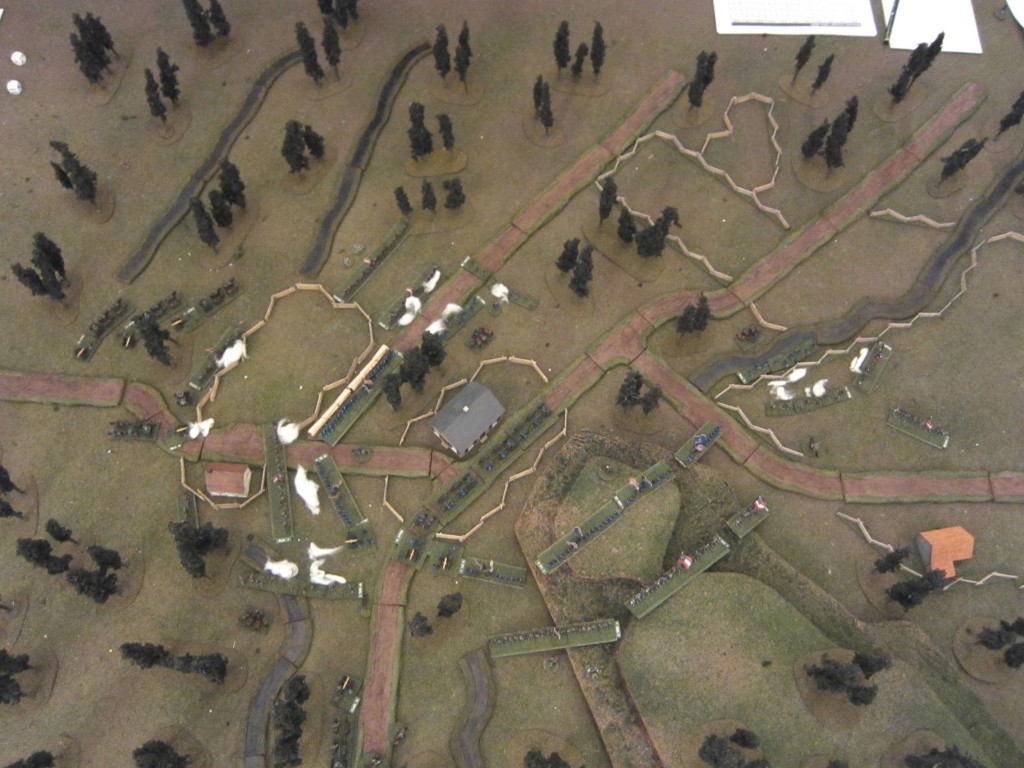 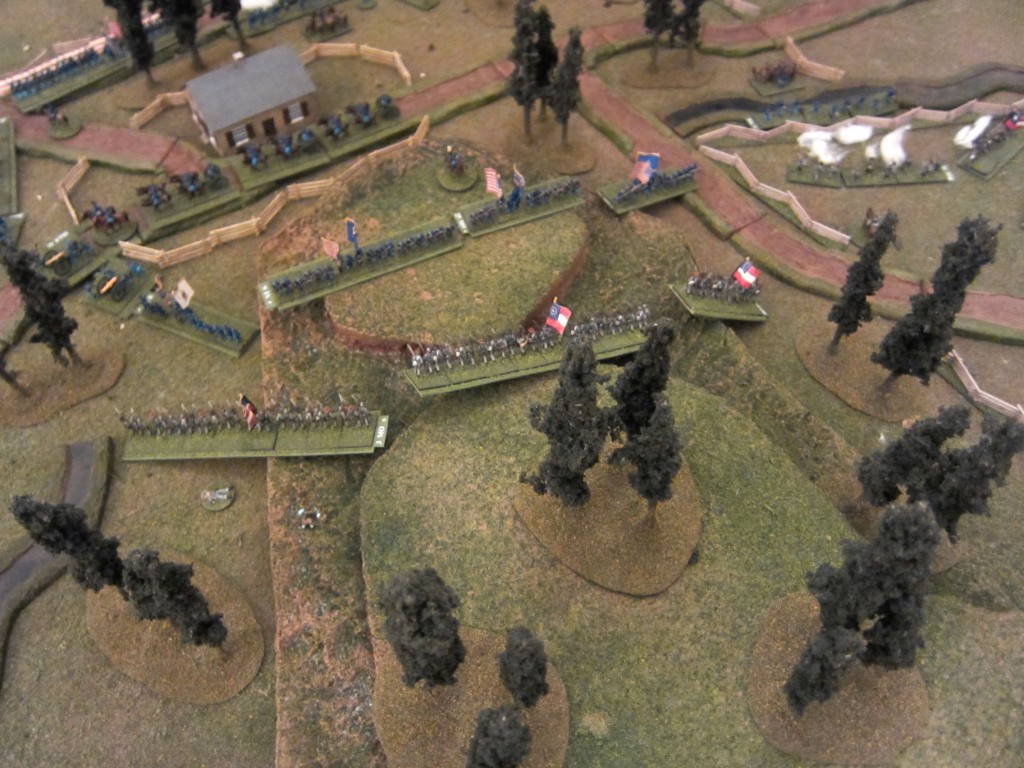 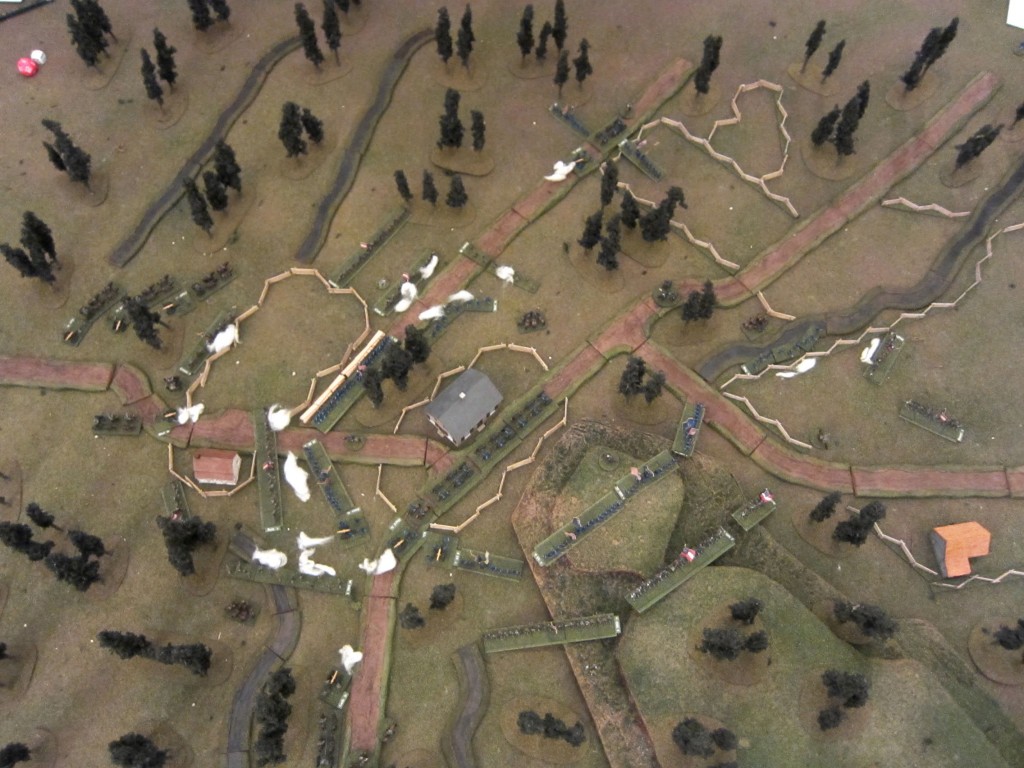 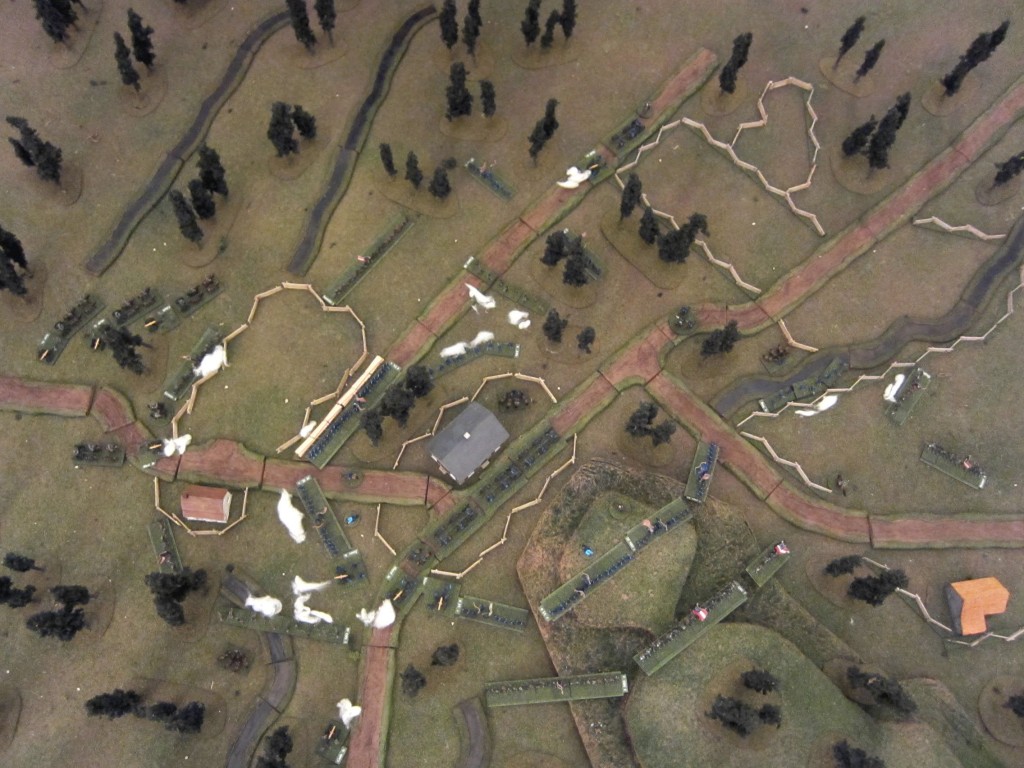 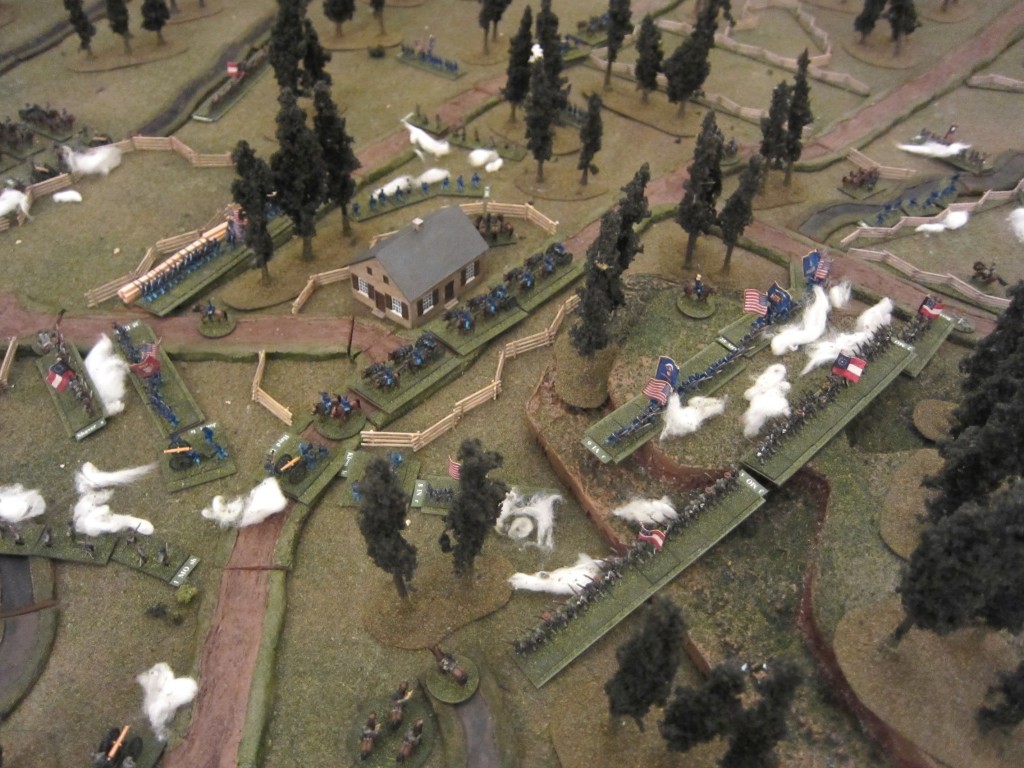 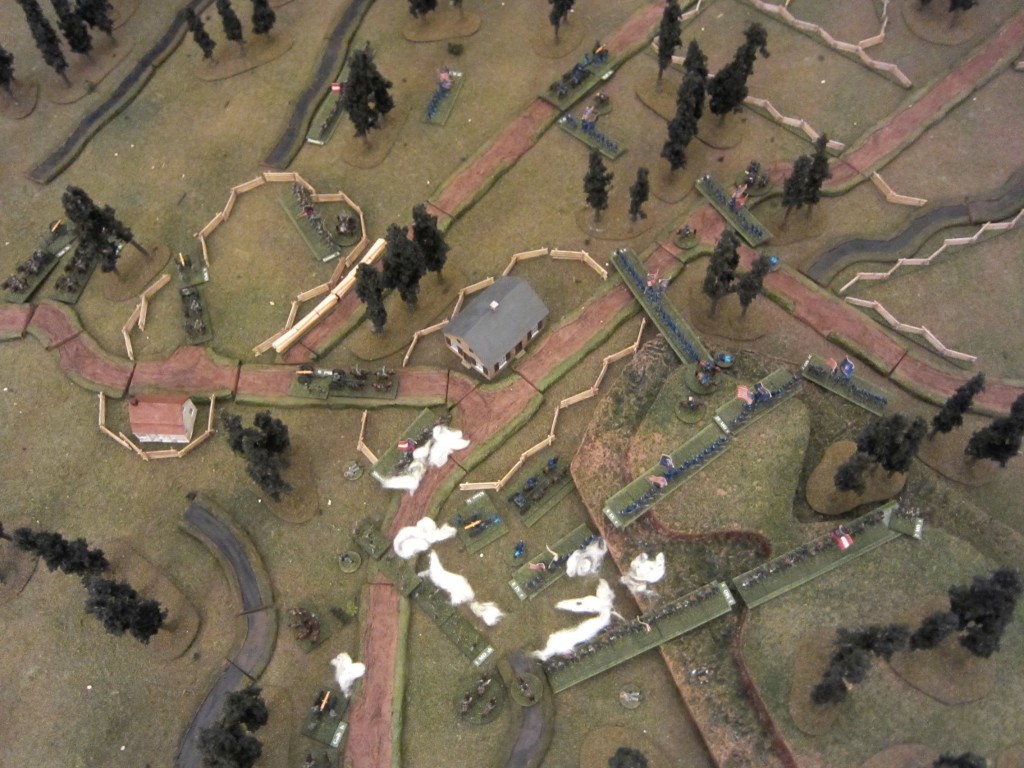 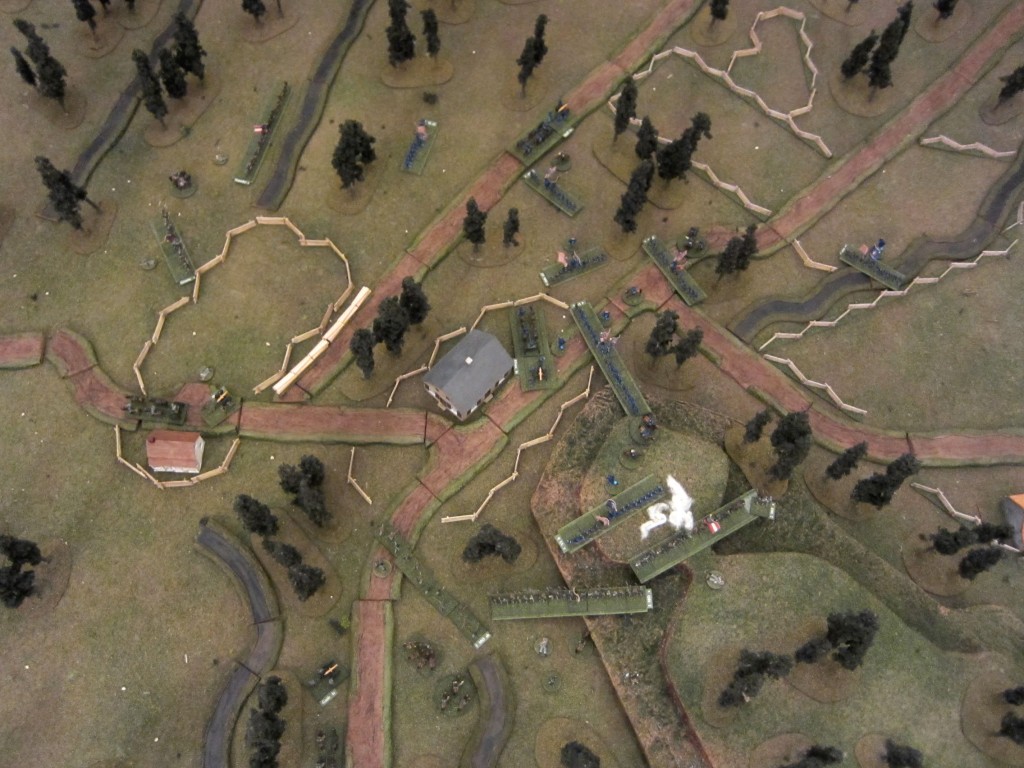 All in all, as close of a drawn game as I’ve seen, and it could have gone either way at numerous times for both sides.

3 thoughts on “Battle of Elkhorn Tavern”