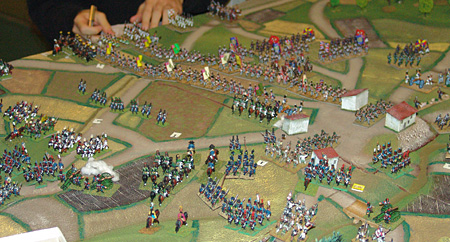 Anglo-Portuguese were initially deployed so that the Hamilton’s Portuguese guarded the ridge north of Albuera with Otway’s Portuguese cavalry securing their northern flank. Von Alten’s small KGL contingent was positioned in Albuera itself. Stewart’s 2nd division was in reserve roughly northwest of Albuera as were Cole’s 4th division with Lumley’s cavalry brigade but even further from the town. Their plan was to guard the northern flank with the Portuguese and to form several lines west of Albuera and repel the enemy with these well supported lines. 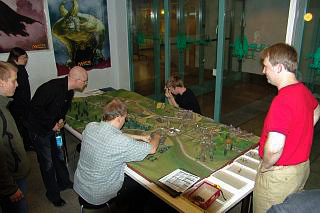 On the north side the French surprisingly started advancing. This was because the Godinot had mistakenly understood his orders so that his troops were to advance to and hold the actual river bank. Advancing this way they arrived within canister range of almost half a dozen Anglo-Portuguese batteries which started reaping grim harvest. The French CIC quickly sent new orders to retreat to ballshot range while artillery of both sides kept on pounding the opposing infantry. The Portuguese troops stepped back as far as they could to either get behind the crest of the hill or at least to lengthen the distance from the opposing batteries. During all this the flank supporting cavalry of both sides just followed the spectacle while around Albuera these opposing divisions began a skirmish battle to which also the KGL skirmishers took part. 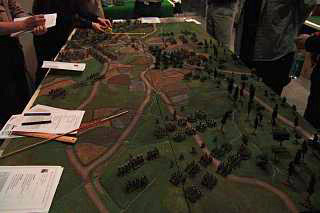 In south the French fell upon the Spanish units struggling to form a front against the southern attack. The Spanish cavalry attacked French infantry while they were still disorganized from crossing the river which had been somewhat deeper than they had anticipated. 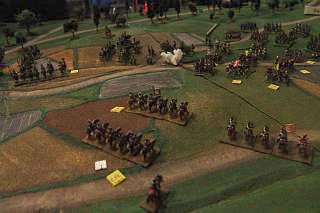 However the French still proved to be more than a match for the weak Spanish cavalry. Losing their (weak) cavalry support immediately during the initial contact the Spanish infantry were thus left between rock and a hard place as they struggled against the French combined arms, but they managed to hold on.

The other Spanish division marched south-eastwards to plug the gap between the other Spanish division’s left flank and Albuera. However before they managed to make a divisional wheel into position a Werle’s reserve division stormed across the river through the olive grove and fell on the left flank of the Spaniards and made mincemeat of battalion after battalion. A solitary battery of the KGL guarding the bridge could do but little to stop the French before being overrun. These heavy casualties inflicted upon the Spaniards with no real effect on French meant that all the Spaniards, apart from the small contingent of Army of Galicia, fled from the battlefield. No one had really expected the Spaniards to actually stop the French but the fact that they hadn’t really inflicted any noticeable losses was astonishing. 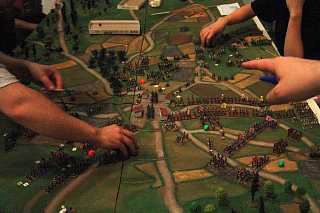 During all this the tightly packed Brits had struggled to get into position. Stewart had managed to form his troops in two lines between Albuera and the Army of Galicia guarding the western heights, but due to the lack of manoeuvring space Stewart couldn’t manage to position his artillery properly. Lumley’s cavalry was also hampered by this space problem. Also the superior numbers of the French cavalry meant that it was no surprise that the British cavalry took a severe trashing during the day but they still they managed to wear down some of the French cavalry.

As Godinot’s French had received quite a beating during artillery shelling and had no longer Werle’s division in reserve behind them Hamilton was ordered into attacking Godinot. Unfortunately Hamilton’s Portuguese were also in a rather bad shape due to French shelling plus they had lost half of their already inferior cavalry support to the guns as well. Thus the attack was rather disorganized but Hamilton nevertheless barely managed to force the French into retreat but his troops also lost the will to fight and fled the battlefield. This meant that the British who had lost but a few units before now became alarmingly close to being demoralized having lost all their weakest battalions. If more than half of Godinot’s troops hadn’t been large units or grenadiers the Portuguese could’ve most likely have managed to barely beat them thus ripping French right flank open. 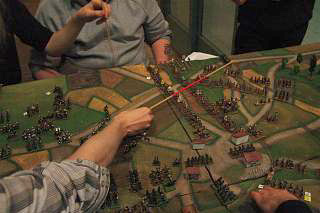 At the same time in the south the French took some time to organize their columns by letting the completely fresh battalions take the lead and fell on the Stewart’s British line supported skilfully by their artillery, cavalry and skirmishers. Stewart’s first line quickly crumbled against this assault without making much of a mark against the French.

Werle was ordered to take the town against which the British left flank rested. Von Alten’s two KGL’s light battalions however disagreed and stubbornly refused to give an inch and while doing so bloodied the noses of many a French battalion. After numerous assaults by many battalions the French managed finally to conquer half of the town but by doing so were too exhausted to keep on going.

At the same time the main French assault advanced against Stewart’s second line which was intact since French artillery and skirmishers hadn’t had time to soften it up. However the second line fared no better than the first and was quickly forced to fall back. On Stewart’s right the Army of Galicia proved that in spite of everything that had happened previously the Spaniards could still put up a valiant fight. Things looked mighty grim for the allied though as only Cole’s 4th division was in such a shape as to from any real resistance against the French tide. Cole’s Fusilier brigade opened devastating volleys against the advancing French and seeing the plight of their enemies quickly fell on them determined to settle the whole affair in cold steel and save British military honour. This proved to be effective as several French battalions were beaten.

After this bloody attack the fighting had to be stopped as sun had set and distinguishing friend from foe had become nigh impossible.

The battle was rather tight draw and had there been enough daylight to continue fighting things could’ve gone both ways as the Anglo-Portuguese army was one battalion and the French were four battalions short of being demoralized having lost some 6-7 battalions in the final turn while the allied lost none.

Before they could cause almost any losses to the French the Spaniards were too quickly routed from the field by the attack on their flank. Also Dominique rolled almost exclusively ones and twos (=definitely NOT good) while defending with Stewart’s division. Then again Janne defended Albuera’s southern half with just one KGL battalion against 2 to 4 battalions per turn for several turns and only then lost after three consecutive ties were re-rolled on the same turn (chants of “KGL, KGL” from the Anglo-Portuguese players must’ve been audible a block away). Also Christopher rolled very well during the counterattack of the fusilier brigade. So it can’t really be said that Fortuna smiled to just one side.

Albuera 1811: The Bloodiest Battle of the Peninsular War

Tactics and the Experience of Battle in the Age of Napoleon